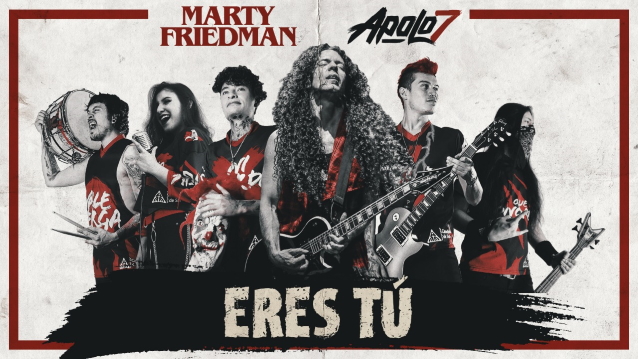 Former MEGADETH guitarist Marty Friedman has collaborated with the Colombian rock band APOLO 7 on a cover version of "Eres Tú", a popular Spanish-language song written in 1973 by Juan Carlos Calderón and performed by the Spanish band MOCEDADES. The official music video for the track can be seen below.

Friedman announced his collaboration with APOLO 7 in a video message posted to his social media on May 23. He said: "I just have a very, very happy announcement. I did a song that I've always wanted to do. It's in Spanish. It's a famous song called 'Eres Tú', and I've always wanted to do this song. I just wanted to play something from my heart to all of my Spanish-speaking friends and fans all around the world. You've been such an important and such a wonderful part of my life for so long, and [I] just really wanted to put it all together in a song. And I finally got a chance to do it with my friends in Colombia called APOLO 7. They did a great arrangement of the song, and they sang so fantastically on it and played so great. Check it out. You'll dig it."

Earlier in the month, Friedman released a "Home Jams" version of his song "Self Pollution", which originally appeared on the 2017 album "Wall Of Sound". The new rendition of the song features Friedman, along with his longtime bandmates Kiyoshi (bass) and Jordan Ziff (guitar),plus Anup Sastry (drums). The split-screen video was filmed in Tokyo, Osaka, Phoenix and Baltimore, with each musician separated in his or her home.

"Wall Of Sound" was released in August 2017 via Prosthetic Records. Produced by Friedman, engineered by Paul Fig (GHOST, RUSH, ALICE IN CHAINS) and mixed by Jens Bogren (KREATOR, OPETH, SEPULTURA),the disc "expands and destroys any conventional notions of instrumental music," according to a press release. Legendary QUEEN producer Mack came on board to handle the mixing on two tracks, "Streetlight" and "For A Friend", which Friedman proclaimed was "an honor for me, for sure."