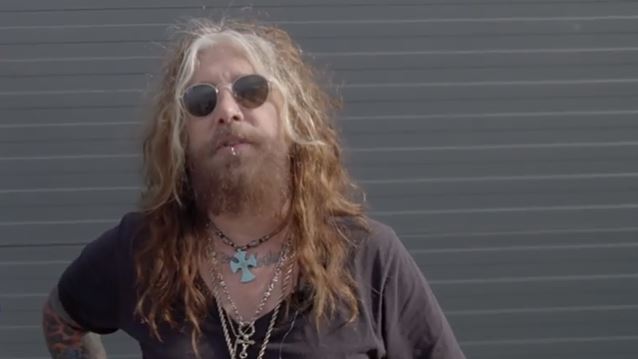 Former MÖTLEY CRÜE frontman John Corabi says that a number of factors led to the disappointing sales performance of the band's self-titled album, including the fact that the group chose to bill itself as MÖTLEY CRÜE following the departure of original singer Vince Neil.

When asked in a recent appearance on "The Rock Brigade" podcast if he thinks the album was perhaps too heavy for the MÖTLEY CRÜE audience at the time of its release, Corabi said (hear audio below): "Did you ever see the movie 'The Perfect Storm'? And you're talking about, this one front is coming in from the south, and this other one's coming from the north, and there's one coming in from the west, and it's just like this whole shitpile of whatever… And I think with us… We really didn't sit down and go, 'Here's what we want the record to sound like.' Honestly, that record is the product of four dudes sitting in a room for almost a year with pretty much every ounce of gear that they used on stage was in the room, and we just fucking jammed for, like, a year. And then Nikki [Sixx, MÖTLEY CRÜE bassist] and I would go and we'd get something formulated, and then Nikki and I would either go to his house or we'd go somewhere and we'd just work on lyrics. And Nikki tends to be very dark. I also tend to be very dark, but I like to have little teddybears and rainbows and happy endings and Nikki's, like, 'Just kill the bitch.' You know what I mean? Whatever. So we kind of did this push-and-pull thing with each other, and the record just came out the way it came out."

"So now we're fighting against that. We're fighting against 'it sounds nothing like MÖTLEY CRÜE.' We're fighting against all those [grunge and alternative] bands that were out at the time [who] were anti everything that MÖTLEY had done prior to me being in the band. And there was a shakeup at Elektra Records. The president of the record label sat down with us. He heard the whole record from top to bottom and he was blown away. He goes, 'This is the best fucking record you guys have ever done. It's insane. It's so good.' And then we put the record out, and because it didn't debut at No. 1, his boss fired him and his entire staff, so nobody was there."

Corabi added: "And then the last and final ingredient in the whole fucking scenario was the fact that — I'm sorry; I love those guys to death — but Nikki, Tommy [Lee, drums] and Mick [Mars, guitar] could not keep their mouths shut. They could not let pass a moment or an opportunity to slag Vince, and I think that drew a line in the sand and made the fans say, 'You're either on MÖTLEY's side or you're on Vince's side.' So I think it was a combination of all that shit I just told you.

"Even if you go back and you look at some of the videos, like the notorious MTV video where we threw them out of our rehearsal room, they're sitting there, they go, 'Oh, did you hear Vince was hurt in a jet ski accident?' I guess he hit a reef with a jet ski, and Mick says something like, 'Well, how's the reef?' And then it was just, like, 'You're invited, but I weigh a ton.' All these fucking comments. And if you watch that video, I'm literally sitting in the background with my head down and I'm just shaking my head, like, 'We are going down right now. This is happening. They are literally drawing a line in the sand.' And it made everybody go, 'Either Vince or MÖTLEY.' And I didn't see the need for it. And I just think that was the icing on the cake of all the other shit. It just really divided the fans."

Corabi in 2015 contributed lead vocals to two songs from MÖTLEY CRÜE guitarist Mick Mars, apparently called "Gimme Blood" and "Shake The Cage", which were recorded at Blackbird Studio in Nashville, Tennessee. The tracks have yet to be released, although snippets of both cuts have surfaced online.

In an interview with Sweden Rock Magazine, Sixx said that writing the "Mötley Crüe" LP with Corabi was a prolonged and difficult experience. He went to call it "a very unfocused record" that was "painful for me, because John Corabi can't write lyrics, and I had to do all that work."