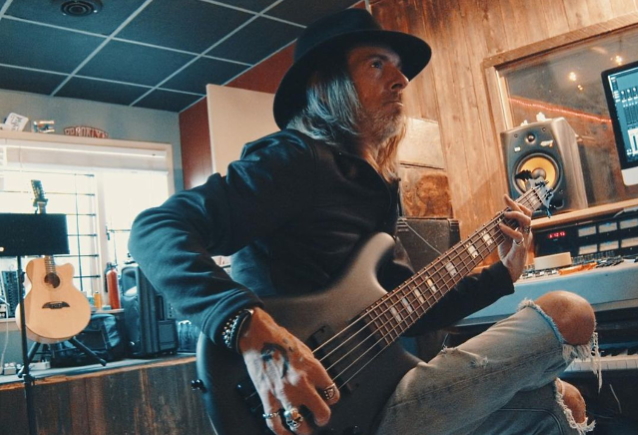 Former PANTERA bassist Rex Brown has told Antihero in a new interview that he just got out of the studio with a good friend of his whom he described as "one of the best guitar players in the business that you would know." Asked if the recordings are going to be used for another Rex Brown solo album or if it is more of a band project, Rex said: "[It's] more for another kind of deal. And I don't want to really talk about it… But the tracks are fucking badass."

After Rex asked the interviewer Mark Dean where he lives, Dean responded "just outside Manchester in the U.K.," to which Brown said: "Then you would know this guy very, very well. He moved to Nashville and became a very, very good friend of mine. And we just cut six just blazing fucking tracks. Un-goddam-real."

Although Brown didn't name his new collaborator, he has been friendly on social media in recent months with JUDAS PRIEST's British-born guitarist Richie Faulkner, who moved to Nashville in 2019.

Rex, who is currently promoting the 20th-anniversary reissue of PANTERA's final opus, "Reinventing The Steel", has completed work on a "a really introspective" follow-up to his debut solo album, "Smoke On This…", which was released in July 2017 via Entertainment One (eOne). The effort marked the first time in Brown's career where he served as both lead vocalist and guitarist in a band.

It’s not fun after awhile brother Rich..I’ve stopped looking at FB altogether for years. “Ppl are strange, when you’re a stranger”..
It’s all good man. We get on with more important things in life!!