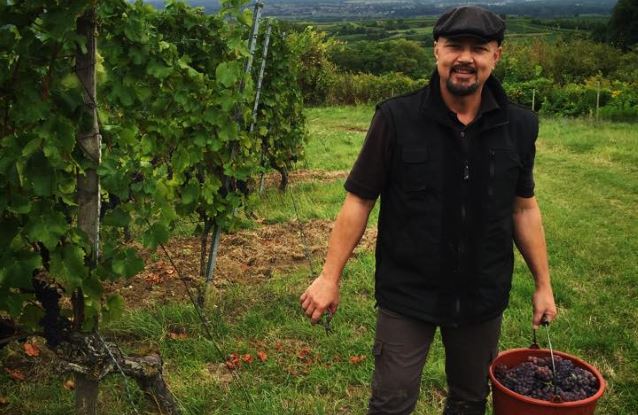 Former QUEENSRŸCHE and current OPERATION: MINDCRIME singer Geoff Tate has announced the release of his wine, Insania, in Europe. He will be working with Friedhelm and Anne Rinklin of the Rinklin winery to release an amazing white wine.

The Rinklin winery is in the small village of Eichstetten, Germany in the Kaiserstuhl hills. The farm has existed since 1713 and were pioneers in the organic movement in Germany.

Insania is an organic white wine made from the Pinot Gris or Grauer Burgunder grape.

Says Geoff: "I have always loved German white wines and the Rinklin wines are some of the very best."

Geoff chose to work with Friedhelm Rinklin and his wife Anne because he felt that they care so deeply about their wines. They intentionally reduce yield which increases the quality. The wine matures with as little intervention or technology as possible. Geoff says: "Rinklin wines are such a product of nature with all the natural variations. They deliberately emphasize these variations which makes the wines more exciting. They run the winery according to old artisanal tradition believing nature provides everything a good wine needs."

Geoff's U.S. version of Insania red and white wines were released annually in the U.S. starting with a 2007 vintage. The wines are made by Holly Turner of Three Rivers Winery in Walla Walla, Washington. Geoff's U.S. Insania is almost completely sold out, with a few bottles of red left at the Three Rivers Winery and a few cases scattered across wine shops in California.

"The Key", the first album of an ambitious trilogy from Tate's new band, OPERATION: MINDCRIME, was released on September 18 via Frontiers Music Srl.