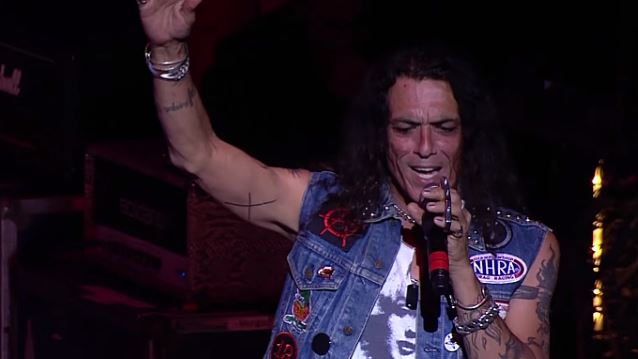 Former RATT singer Stephen Pearcy will release a new compilation, "Before & Laughter Part III (1977-2015)", in the next couple of weeks via his Top Fuel Records label. The collection will contain songs from Pearcy's thirty-plus-year career, including never-before-heard live and studio versions of tracks from MICKEY RATT, ARCADE, VICIOUS DELITE, VERTEX and early RATT songs that were laid down before the the arrival of the band's original members and the signing of RATT's first record contract.

Says Pearcy: "I have literally hundreds of cassettes, CD and every format of recordings over the last thirty-plus years and decided to really get into it and find the charms. I was surprised to find some great music with my bands and projects that should be heard."

Pearcy is currently at MT Studios — the facility owned by his bassist, Matt Thorne — recording "about a dozen songs" for a new solo album, titled "Smash". The first two singles — "I Can't Take It" and "Just One More Time" — have already been completed and are now available on iTunes. The singer told "That Metal Show" co-host Eddie Trunk in a recent interview: "I wanna record about 20 [songs] — possibly 25 — and release a song every few weeks, when it's done [and] ready, and everybody will get a new single until they get a complete, huge album CD package."

The recording and touring lineup of Pearcy's solo band is as follows: