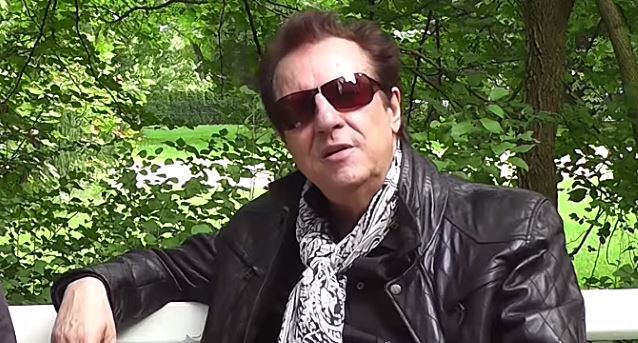 Ex-SCORPIONS Drummer HERMAN RAREBELL: 'The '80s Were The Best Period For Rock Stars To Live'

At the end of September 2014, Agentinnen.net conducted an interview with former SCORPIONS drummer Herman Rarebell in Germany. You can now watch the chat below.

Asked what it was like being a rock star in the '80s, Rarebell responded: "I think the '80s were the best period for rock stars to live, because, in those days, you didn't have so many restrictions like you have now. Now you have restrictions nearly on everything. At least we had the freedom with a lot of things. It was really sex, drugs and rock and roll in those days. And I think nowadays everything is restricted, because we have a lot of health problems all over the world. We have different drug problems. Crack didn't exist, for example, and all those heavy stuff [which wasn't] around then. The world was, politically, in a completely different outlook than now. People were on a love-and-peace trip, so to speak."

He continued: "I'm not saying that because now I'm looking back as an old man; I'm just saying it was the best years, really, for rock and rock stars.

"When you look at the arenas and the old film footage we have, you can see how much fun people had [back then]; it was out of control, completely.

"So, for me, I would say the golden… the golden years I had, anyway, with the SCORPIONS: the second half of the '70s, the complete '80s and the complete half of the '90s. So I really had the best years. And I say, every day, to my creator, 'Thank you very much for all this.' It was a great time. As we say in Germany, all good things come to an end, and I felt it was time for me [to leave], after twenty years being with the SCORPIONS."

Rarebell in 2013 released an album, "Acoustic Fever", containing all-acoustic versions of 12 SCORPIONS songs he co-wrote while in the band.