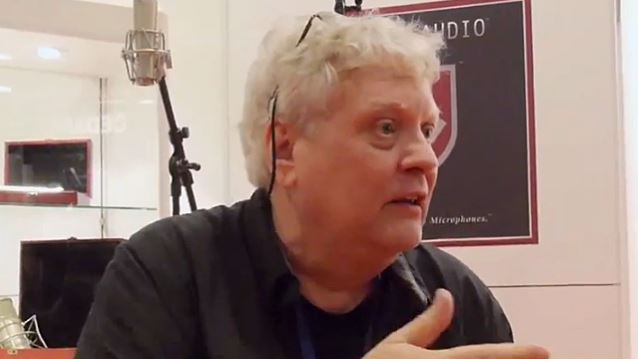 Famed rock/metal producer Michael Wagener appears on the latest episode of the "Decibel Geek" podcast to reflect on his experience working on SKID ROW's classic sophomore album, "Slave To The Grind".

Recorded at New River Studios in Ft. Lauderdale, Florida and Scream Studios in Studio City, California, "Slave To The Grind" made history on June 11, 1991 when it became the first heavy metal album during the SoundScan era to debut at No. 1 on The Billboard 200.

Wagener details the process of making the LP, including pre-production that took place in New Jersey, where things got off to a promising start.

"Before we went to Florida, we went into a fairly big studio in Jersey and pretty much recorded the whole record," he said. "We made a good demo, so to speak. The funny thing is the song 'Slave To The Grind' is from that session. It was recorded and mixed in an hour; and that's what you're hearing on the record. It was not even remixed. One hour, it was recorded. Everything is live on there."

The band then headed to Florida to find a suitable studio to record the album. Wagener describes some of the excess that went on while the band was in the Sunshine State.

"That trip is unforgettable, man," he said. "It was just crazy. We hung out with SAIGON KICK, and everybody got extremely drunk. It was a cool weekend. It was very quiet in the limo on the way back to the airport. Heads down, you know? I remember one of the guys puking out the window of the limo. And, then, I see the car behind us putting on the wipers. [Laughs] It's rock and roll, man.”

"Slave To The Grind" was notable for presenting a heavier, darker tone in music and in lyrics. Wagener details the process behind that decision and the effect it had on album sales.

"That was the plan," he said. "Every band at the time would say, 'Oh, our next album is way heavier,' but we did it. We followed that route. 'Let's stick to being SKID ROW but let's make it a little tougher, a little harder.' We still had the ballads on there. They were maybe not quite as sappy as on the first record, but it also didn't sell as many copies as the first record, because the housewives that like the ballads, they're buying the records, but it's still an amazing album."

While the early '90s were a period of great success for SKID ROW, as many know, the ensuing years provided struggle, professionally and personally, as vocalist Sebastian Bach ending up getting fired in late 1996. Asked about the animosity that led to the split, Wagener offers: "Young kids becoming extremely famous, that goes to your head. All of a sudden, you're invincible and stuff just happens. And if they think they're invincible, they do things that might not really work in the end. I think some of that was going on. It wasn't really good for the band; some of the stuff that was said about record companies, executives, and stuff like that. And then Snake [guitar] and Rachel [Bolan, bass] had to make up for it and go play golf with the guys, y'know? And it got to the point that it got so out of hand that they said, 'You know what? Forget it. It's not worth it anymore. And all that anger and all that animosity and stuff that we have to deal with, it's not worth it.'"

He continued: "I talked to Rachel three or four years later — because I did more records with them — and I said, 'Is [a reunion with Sebastian] ever gonna happen again?' and he said, 'No. As long as I have a slice of bread on my table, no.'"

Wagener added: "I think we could have one at least two more massive albums with SKID ROW, but to them, their sanity was more important."

The entire interview can be heard using the Spreaker widget below.