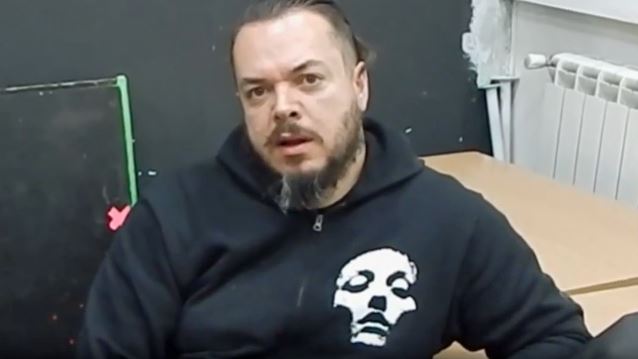 Agoraphobic News conducted an interview with Igor Cavalera on November 14 in Belgrade, Serbia. You can now watch the chat below.

Asked to recall a funny story involving late MOTÖRHEAD mainman Lemmy Kilmister, Igor said: "One time we were on tour with MOTÖRHEAD. I like to draw; I draw little caricatures of people's faces, kind of funny stuff. So I used to draw Lemmy in different places in the venue — like in the [backstage area], I would do Lemmy on the table or in the toilet, I would [draw] Lemmy. But I would never sign it; I'd just leave it there. And then one time I was somewhere in the venue and then Lemmy came in, and he was, like, 'Hey, I heard that you did the drawings of my face.' And I was, like, 'Yeah.' I didn't know how to say 'No.' And he was, like, 'You have a sick sense of humor.' And he gave me his book, 'White Line Fever'. And he was, like, 'Merry Christmas.' And I was, like, 'Wow!' And he wrote something like, 'Igor, you bastard,' or something like that. He was such a great guy. "

Igor went on to pay tribute to another late MOTÖRHEAD member, drummer Philthy "Animal" Taylor, who died in November 2015 of liver failure. He said: "We had a chance to do a lot of tours with MOTÖRHEAD, some really cool ones. I remember even having a chance to watch MOTÖRHEAD with Phil 'Animal' Taylor on drums on one of the tours we did. It was really cool. Like, in Germany, they did a Christmas tour, and I was, like, tripping on it: 'Man, this guy is my idol.' I was, like, 'Fuck!' And I was really sad when he died, 'cause he was, like, for me, one of the coolest drummers. For a drummer, I think if you like fast beats with hardcore and rock, I think Animal was one of the first guys to speed things up. He was the coolest."

Igor and his brother, former SEPULTURA member Max Cavalera (guitar, vocals),are celebrating the twentieth anniversary of the band's classic album "Roots" by performing the LP in its entirety on a European tour. They are joined by their CAVALERA CONSPIRACY bandmates Marc Rizzo (guitar) and Johny Chow (bass).