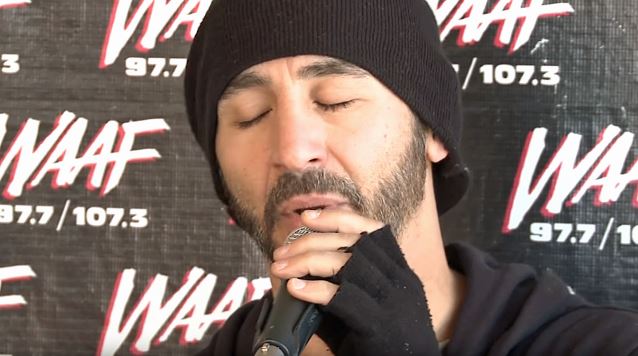 Video footage of GODSMACK frontman Sully Erna performing his solo song "Don't Comfort Me" at the studios of the Worcester/Boston, Massachusetts radio station WAAF can be seen below. The track is taken from Erna's second solo album, "Hometown Life", which was released on September 30 via BMG.

Erna told the WRIF radio station about "Hometown Life": "As people knew that, or learned that [my first solo album, 2010's] 'Avalon' was quite the departure from what I do in GODSMACK, this is pretty much another departure from what I did with 'Avalon'. This one's a lot… It's not as earthy and tribal as 'Avalon' was; it's a little bit cleaner production — kind of…. if I was to describe it, maybe more of a masculine Adele style. But there's a lot of different genres on here too; there's little hits of country or blues and jazz or contemporary, like some rock vibes at times. There's just a little bit of everything, and I love that about this record. I love that I didn't have to get handcuffed to one genre of music."

Asked what his daughter thinks of his new album, Sully said: "I played her some stuff when I was putting it together and starting to mix some of the rough forms of it, and and she likes it a lot; she thought it was cool. She liked 'Your Own Drum' and she liked 'Different Kind Of Tears' a lot. And it's funny, because those songs are kind of inspired by her and her age group in general — just hoping that they'll be leaders and not followers and let 'em run to the beat of their own drum and things like that. So it was interesting that those are the ones that kind of singled out. But she likes my music. She's certainly into a lot of different styles of music, and she's got a very wide variety of stuff she listens to for as young as she is. So, yeah, she has great taste in music, but she listens to everything. As you see them grow, and as a parent, you're looking at their life through the eyes of a child. And there's just things that are really interesting, and they're getting to that stage now as teenagers where they're very challenging years; she's starting high school and you can easily go down the right path of the wrong path. So it's been a very interesting couple of years for me so far watching this whole teenage age develop."