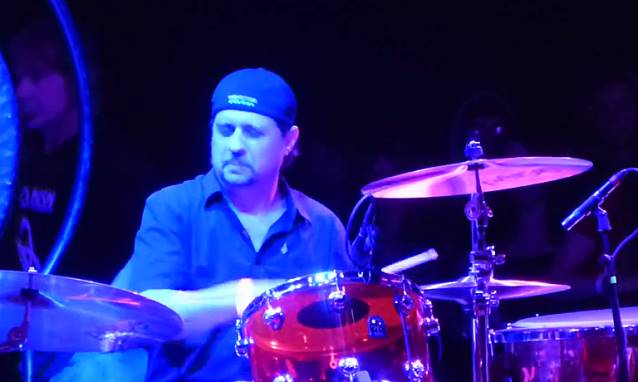 Fan-filmed video footage of former SLAYER and current PHILM drummer Dave Lombardo and his PHILM bandmate Gary Nestler performing a cover version of LED ZEPPELIN's "Since I've Been Loving You" during the Bonzo Bash NAMM Jamm 2014 "The Ultimate Celebration To The Ultimate Drummer - John Henry Bonham Of Led Zeppelin", on Thursday, January 23 at The Observatory, in Santa Ana, California can be seen below.

Asked if Bonham was an early inspiration on his playing, Lombardo told The Nervous Breakdown: "He showed me groove. He showed me dynamic by listening to his playing.

"When they played, it elevated. Although the tempo didn't build, there was something in the playing that just made it come up, and you're feeling, 'Oh man, that feels great,' and then they bring it down and groovy."

He continued: "I don't know, I think I feel music more than a lot of people do. You know, it's how you hit the drum. It's not the execution of the hit. It's not how many paradiddles you can do or how fast you can do it, it's how you execute the beat."

During an appearance on "The Steve Austin Show - Unleashed!" podcast, SLAYER guitarist Kerry King stated about the band's latest split with Lombardo: "When Dave was in [the band] this last time, I figured I'd be on the stage with him until one of us fell off the stage, dead. Things change. He got some bad advice and listened to some bad advice, gave us an ultimatum ten days before we went to Australia [to do the Soundwave festival tour]. And I said, 'I can't have this over my head.' And I feel bad for Dave to this day; I really feel bad for him because he shot himself in the foot. Maybe he thought he had the upper hand, but you ain't gonna get me…. Before I got home, I knew exactly what I was going to do for Australia."

In March, Lombardo will take part in an Adelaide Festival concert in Adelaide, Australia with avant-garde musician John Zorn.

Lombardo will perform with John Zorn and Bill Laswell as part of the BLADERUNNER trio.