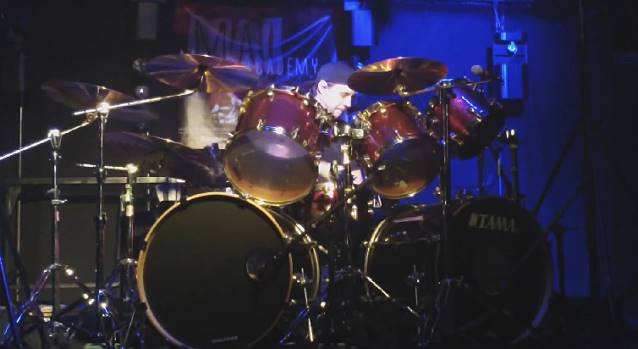 Lombardo released a statement in February 2013 revealing that he "discovered 90% of SLAYER's tour income was being deducted as expenses, including the professional fees paid to management, costing the band millions of dollars and leaving 10% or less to split amongst the four of us. In my opinion, this is not the way a band's business should operate. I tried rectifying it by letting my bandmates know, and Tom [Araya, bass/vocals] and I hired auditors to figure out what happened, but I was denied access to detailed information and the necessary backup documents." He added: "I was told that I would not be paid until I signed a longform contract which gave me no written assurance of how much or on what basis management would deduct commissions, nor did it provide me access to the financial budgets or records for review. It also forbade me to do interviews or make statements having to do with the band, in effect a gagging order."

In a November 2013 interview with Minneapolis City Pages, Araya stated about Lombardo: "Dave left the band originally in '91 or '92, After that, we brought in Jon Dette for two years and then we hooked up with Paul [Bostaph], who did four really great albums with us. Then he decided to move on. Our manager hooked us up with Dave again and when we were putting together [2006's] 'Christ Illusion', Dave offered to help out. We wanted to make things fair for him, so we offered him a contract with the band. Most recently, we were offered to tour Australia. When we were rehearsing, he seemed to do a 180 and said some things that kind of upset me and Kerry [King, SLAYER guitarist]. Kerry just looked at him and said, 'If you feel that way, then why are we even rehearsing for this tour?' So we wrote him a letter and said, 'Listen, we need to know if you're going to do the shows in Australia. If you're not, we need to do something about that.' We didn't get a reply. We were put in a position where we had to do something, so we got Jon Dette to play with us again. After what happened with the Australia tour, we made the decision to move forward and make him aware that we no longer needed his services. He was really upset about that. He wrote a rant on Facebook. He said some things that he shouldn't have. It really upset us. And it upset me. I was fuming. I couldn't believe that he would throw that out in the court of public opinion. After that, Jeff [Hanneman, deceased SLAYER guitarist], me and Kerry all got on the phone and talked about it. And Paul's name came up. It was a sure thing with Paul. He'd been in the band for over 12 years. So we gave him a call to see if he was interested and he was more than happy to. It was a no-brainer. He's an amazing drummer."

During an appearance on "The Steve Austin Show - Unleashed!" podcast, Kerry King stated about SLAYER's latest split with Lombardo: "When Dave was in [the band] this last time, I figured I'd be on the stage with him until one of us fell off the stage, dead. Things change. He got some bad advice and listened to some bad advice, gave us an ultimatum ten days before we went to Australia [to do the Soundwave festival tour]. And I said, 'I can't have this over my head.' And I feel bad for Dave to this day; I really feel bad for him because he shot himself in the foot. Maybe he thought he had the upper hand, but you ain't gonna get me…. Before I got home, I knew exactly what I was going to do for Australia."