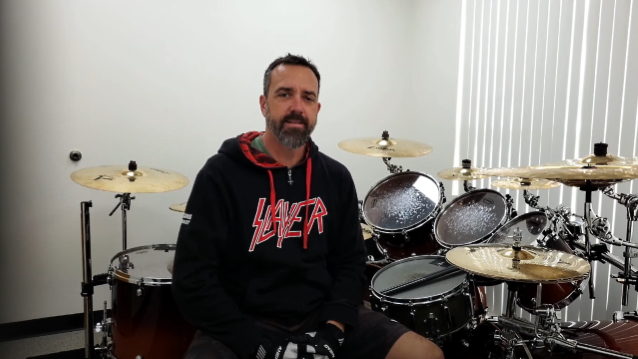 Drummer Jon Dette (TESTAMENT, SLAYER, ANTHRAX) has uploaded an eight-minute video in which he offers a "small but powerful drumming tip" on what he believes is a staple to the SLAYER drumming sound: the ruff or the diddle or grace notes.

In the clip, which can be seen below, the 51-year-old Dette — who played as a full-time member of SLAYER from 1996 to 1997 and as a touring member in 2013 — says in part (as transcribed by BLABBERMOUTH.NET): "A tip for this week is a SLAYER tip, for SLAYER songs. And in my opinion, it's one of the coolest little things that you hear in SLAYER drumming, particularly Dave's [Lombardo, original SLAYER drummer] drumming. And that is what we could either call a ruff or a diddle or grace notes — whatever you wanna call it. It's just one of those little things, almost like you hear it but maybe you don't hear it, if that makes sense. It's just this little thing — it's brilliant; it's amazing; I love it. It's one of my favorite things to do, whether I'm playing a SLAYER song or even ANTHRAX songs or any other songs. But what I wanted to point out is not only what's done but a mistake that I see some people making. I made the same mistake early in my drumming journey as well.

"So I'm going to demonstrate the correct way and what we would call the incorrect way," he added. "Again, there's no right or wrong way to do stuff, but if you wanna learn the right way that we do it, then I'm gonna show you the way that it's done. So with that, then you can roll however you want to at that point."

In a 2013 interview with Metal Rules, Dette revealed that he worked with SLAYER guitarist Kerry King on some of the early ideas for what became the band's final studio album, 2015's "Repentless", before he was replaced by a returning Paul Bostaph. "I actually started working with SLAYER after we had gotten back from Australia [in early 2013]," he said. "We started working for demo and music for their new record. And then obviously what happened with Jeff [Hanneman, guitar] passing away, that changed some things. But it was definitely moving in that direction for me to be working with SLAYER [again]. But as I said there are just some things that changed with that once Jeff passed away, and I think, ultimately, they felt more comfortable with ‎Paul Bostaph, just because Paul had been in the band for longer. I think it was not going to be as much of a shock to their fans, because first Dave is gone, and now Jeff is gone, the band, it's now down to two original members. So if Paul makes them feel more comfortable and at home, then more respect to him and I wish them the best with that."

In recent years, Dette had played sporadic shows with ANTHRAX as a temporary replacement for Charlie Benante, who had been undergoing physical therapy in his continuing battle with carpal tunnel syndrome.