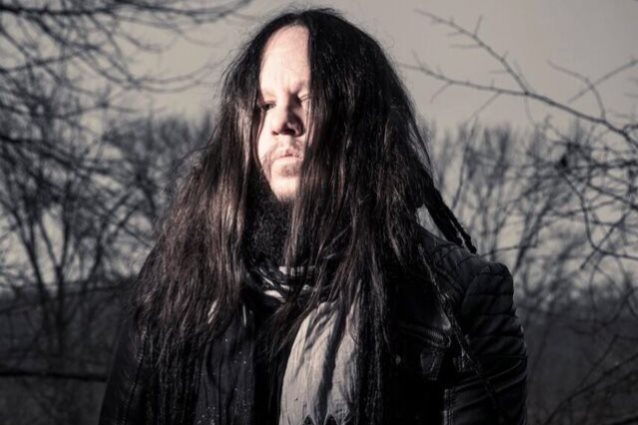 Former SLIPKNOT drummer Joey Jordison says it would be "fucking awesome" to reconnect with his former bandmates and discuss a possible reunion.

Jordison and the members of SLIPKNOT have been silent and evasive about the reasons for his dismissal from the band in December 2013, but Jordison finally spoke about it last week while accepting an award at the Metal Hammer Golden Gods Awards in London, England. Jordison revealed that he had been diagnosed with a rare disease of the nervous system which left him unable to play the drums properly and he had to be carried to the stage during his final run of shows with SLIPKNOT.

Joey, who says he was fired from SLIPKNOT via an email, told Metal Hammer magazine that he wouldn't rule out a return to the band. "Honestly, I'm not trying to be dramatic, but if that was brought up, what I'd want to do would be to get together. I'd want to see them, just hug it out and feel that energy that we had when we were fucking young and hungry and all that shit."

He continued: "They're my brothers. We'd hug and talk and do shit like we used to do. We used to sit up all night along planning this shit and what we wanted to do. So that's how I'd wanna do it.

"It'd have to be in person. If it happened, that would be fucking awesome, but only time will tell."

Jordison also praised SLIPKNOT's latest album, ".5: The Gray Chapter", which features his replacement, Jay Weinberg, son of longtime Bruce Springsteen drummer Max Weinberg. He said: "I listened to the whole record multiple times. And I think it's great. It's fucking cool and I'm glad they moved on. I'm glad they're carrying on the name, because what's important is the fans."

Back in 2014, SLIPKNOT singer Corey Taylor told Metal Hammer that firing Jordison was "one of the hardest decisions" the group ever made, adding that Jordison is "in a place in his life" which is "not where we are."

At the time, Taylor told the magazine that he could not get into the details behind Jordison's firing "for legal reasons."

Jordison was a founding member of the band, one of its main songwriters and drummer for SLIPKNOT for 18 years.