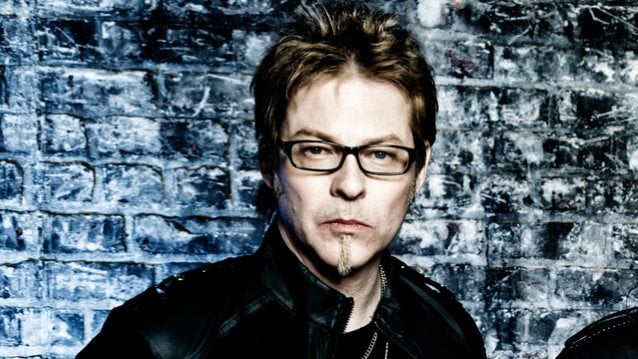 Tim Gaines claims that he was kicked out of STRYPER after he was given an ultimatum by his former bandmates to either "give up" his new wife or get fired from the group.

The musician's exit from the band has been rumored for months, ever since STRYPER guitarist Oz Fox revealed that Tim was going through a divorce, forcing the group to take a hiatus and possibly consider a future without the bassist.

Gaines told KNAC.COM last month that "all hell broke loose" after he split up with his previous wife, "which is taboo as far as Christianity, I guess." He added: "I'm not the only guy in STRYPER to have gotten a divorce. Everybody in the band is married to divorced people. And I'm the bad guy, but everybody else has done it too, so? Whatever. Live in glass houses and everything will be exposed at some point or another."

A few days later, the remaining members of STRYPERreleased a statement denying that Gaines's divorce was a factor in their decision to part ways with the bassist and blaming Tim's "erratic and hostile behavior" for his dismissal from the group.

Earlier today, Gaines took to his Facebook page to once again address his departure from STRYPER. He wrote: "My recent demise within the STRYPER camp came about because I actually have testicles. I stood my ground when I was told to give up the woman I love (who is now my wife) or get fired. I threatened to sue. I was 'conveniently' fired ten days after my marriage to Brandee, on the grounds that I made some posts threatening to sue the band for wrongful termination. They called it 'threats.'

"My recommendation to Oz and Bob [STRYPER drummer Robert Sweet]? Grow some balls and stand up to that pathetic one and his conniving wife" — apparently referring to STRYPER frontman Michael Sweet — "or just continue to live a life of mediocrity. You both have been threatened with termination over the last several years. He has a million-dollar home. You rent and drive twenty-year-old broken-down cars. You both have NOTHING to show for your thirty-five years. Quit playing rock star and get a clue, dumbshitz."

The band has not yet announced a replacement for Gaines.

Tim is currently working with FAITHSEDGE singer-songwriter Giancarlo Floridia on that band's fourth album, tentatively due in the fall of 2018.

My recent demise within the Stryper camp came about because I actually have testicles. I stood my ground when I was told...