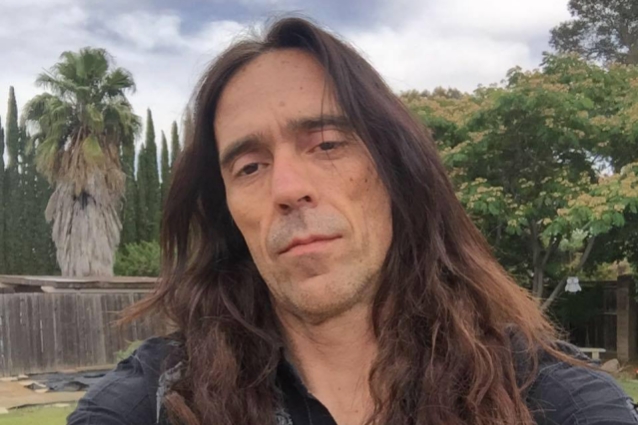 Ex-TESTAMENT Bassist Says He Was Treated 'Like A Thing, Like A Stage Prop' And 'Not A Person' By His Former Bandmates

Former TESTAMENT bassist Greg Christian says that he was treated like "a thing" and "a stage prop" during his tenure with the band and claims that the business he "helped start" has been "hijacked."

Christian — whose acrimonious January 2014 exit from TESTAMENT was well publicized on these pages — made his latest comments while reflecting on his career trajectory on his personal Facebook page.

In a post that was made public, Christian wrote: "Lately I've had more than a few people ask me about TESTAMENT and how things went down. I don't talk about it anymore. No point. No one will ever understand. I honestly still don't and I was there.

"About the most basic bottom line is: we had one fundamental disagreement, and it was irreconcilable:

"On a human level, I thought my life mattered, and that my kids and other family members mattered too. And I still think so.

"To them, I didn't matter. I was a thing, like a stage prop, not a person.
And they still think so.

"That's about as real as it gets.

"Anyone can say whatever but the bottom line #s don't lie.

"For perspective: I was 17 when I joined the band, 18 when I did the LEGACY [pre-TESTAMENT] Demo, 20 when I did 'The Legacy' album. It was my life til I was 30, thousands of shows, 6 studio albums etc etc etc later. Came back 9 years later. 3 years weekend warrior fly dates, then in '08 it got real again. Busted ass another 1k+ shows building it back into being relevant for 5 more years...

"But the business I helped start and build twice had been hijacked. That business was my 401k, my savings, my retirement, my kids college $, etc etc. It was the life I worked for but don't have.

"I'm 53 now and that business is rolling pretty fat and I've made a heavy investment into it.

"If I mattered, you'd think they'd at least try to make that right. Ya know? But I've never even heard any acknowledgment that they did me dirty..

In a 2016 interview, TESTAMENT singer Chuck Billy told Metal Forces that Christian wanted to be an "equal partner" in TESTAMENT after rejoining the band following a nine-year break. Billy said: "Me and Eric [Peterson, guitar] own the band. Greg doesn't own the band. Greg left the band for nine years and wanted to come back in the band and be an equal partner, and that's not what the deal was. Greg came back as a reunion bass player, and that turned into seven years of doing a reunion. There were never talks about, 'Hey, come on back and let's be equal partners like we were when we started this band.' That's not what was gonna happen. I think he expected that, and we agreed to disagree."

The singer continued: "While they were off doing whatever they did in life, me and Eric held down the fort for all of those years, and they were tough years. Those were in the '90s, when it was very tough for heavy metal. We weren't making any money. Yeah, we felt strong that, 'No. If it was you, Greg, or if it was Steve [DiGiorgio, bass], or if it was any other bass player, here's what we're gonna pay you to play bass in TESTAMENT. You can do whatever you wanna do.' Like Gene [Hoglan, drums], Steve and Alex [Skolnick, guitar]; whenever they're not in TESTAMENT, they're doing other projects. We don't hold them up; we don't say, 'You're in TESTAMENT. You can't do anything else.' Greg felt what he felt and decided he didn't wanna do it, so he left. I think maybe he regrets it, and he's talking out because of that. That's all I can think. [Laughs] He got to travel and play music around the world, and didn't have to get a job. I thought it was pretty good. [Laughs]"

TESTAMENT's twelfth album, "Brotherhood Of The Snake", was released in 2016 via Nuclear Blast. A follow-up disc is tentatively due in late 2019 or early 2020.

Lately I’ve had more than a few people ask me about Testament and how things went down. I don’t talk about it anymore....