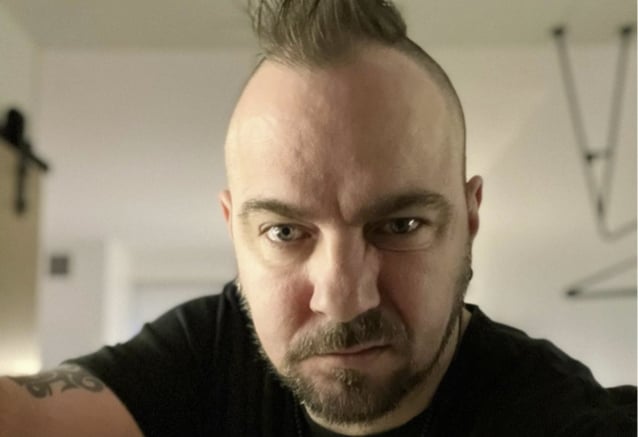 Former THREE DAYS GRACE and current SAINT ASONIA frontman Adam Gontier spoke to the Razor 94.7 and 104.7 about the turning point in his battle with substance abuse issues. He said (as transcribed by BLABBERMOUTH.NET): "It was pretty recent, actually. In 2017, I went into a treatment center. I was doing some solo acoustic shows in Canada, and I had relapsed, and I was using at the time. So this wasn't that long ago at all. And at the time, my wife was pregnant [with our first child]. So we had a weird situation where I was on the road and my tour manager and some friends intervened after one of the shows and basically sent me to Nashville to a treatment center. So I ended up there, and it was a really rough situation. I ended up in an institution for a couple of weeks because my mind wasn't right. And at that time, when I was in the hospital, my son was born in Minnesota. So I wasn't there for him being born. And when I started to come around in the hospital and I saw the picture before they told me he was born and stuff, that was the moment for me that I… I mean, it's no longer about me. So since that day I've been sober, and [I have] no plans on going back to a dark place anytime soon. I don't want my kids to see that version of me ever."

Gontier left THREE DAYS GRACE in the spring of 2013. At the time, the Canadian rockers cited unspecified "health issues" when his departure was announced. Gontier was replaced by Matt Walst who was previously the singer of a band called MY DARKEST DAYS. Adam later released a statement explaining he exited THREE DAYS GRACE to pursue new projects, and not to deal with addiction.

SAINT ASONIA, which also features STAIND guitarist/founding member Mike Mushok, will release a new EP, "Introvert", on July 1 via Spinefarm. The quartet is rounded out by Cale Gontier (bass) and Cody Watkins (drums).

SAINT ASONIA's self-titled debut came out in 2015 and charted Top 10 in Canada and entered the Billboard U.S. Rock Albums chart at No. 2. The album was driven by the Top 10 radio tracks "Better Place" and "Let Me Live My Life", as well as the high-concept video to the featured track "Fairy Tale".