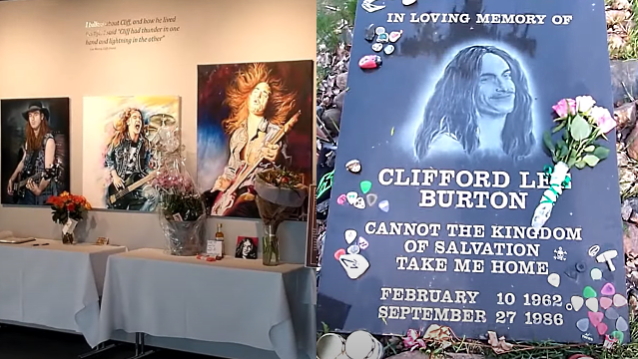 Writer/musician Jeremiah Karlsson has uploaded a new video tour of the museum honoring the legacy of late METALLICA bassist Cliff Burton, which officially opened on Saturday (May 14) in the municipality of Ljungby in Sweden, near where Burton died in a tragic tour bus accident in 1986. Also included in the video is a tour of the memorial stone dedicated to Burton which was unveiled in 2006 at the Gyllene Rasten restaurant/bar in Dörarp (outside Ljungby). It was 20 years earlier that Cliff died just over the road from where Gyllene Rasten is located.

The museum includes pictures, albums, posters and tickets, along with interviews and photos from the first photographer at the crash site, Lennart Wennberg of the Swedish newspaper Expressen. There is also a film of recollections from first responders at the crash scene as well as a stage that recreates METALLICA's last performance with Burton in Stockholm, with copies of the bass and drum kit he and drummer Lars Ulrich used, plus a poster with Burton's last autograph.

The organizers told Guitar World: "We primarily want to honor Cliff Burton, who died so tragically in the middle of his career, and talk about who he was as a person and a musician. Our second main purpose is to create a meeting place for all those who seek the memorial site in the small community of Dörarp. We want to continue the fine work that the fans started when they started raising funds to make Cliff's memorial stone."

Ljungby historian Krister Ljungberg, who is involved in opening the museum, told SVT in 2021 that he had received message of support from METALLICA fans from around the world. Among them was a video from fans in Mexico who asked how they could help build the museum.

"I'm not a huge fan of METALLICA, but I usually say that I'm the biggest fan of METALLICA fans," Ljungberg said. "I really love these people; they are absolutely amazing."

A newly started association, Bergabygden's culture and tourism, was awarded SEK 300,000 (approximately $32,000) from the Swedish National Heritage Board, a government agency responsible for world heritage sites and other national heritage monuments and historical environments, to help start the museum.