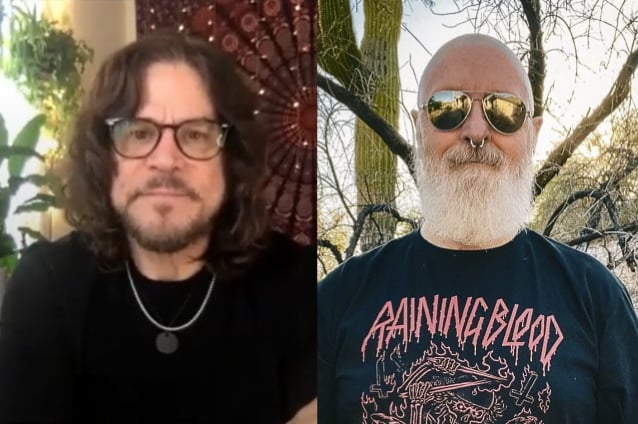 Former TNT singer Tony Harnell says that he was on the list of candidates when JUDAS PRIEST was looking for a new vocalist to fill the massive shoes of Rob Halford in the early 1990s. "I was considered at one point, when Rob Halford left, my manager told me I was being considered for JUDAS PRIEST," the 59-year-old Harnell, who famously spent only eight months fronting SKID ROW, said during an appearance on the latest episode of the GUNS N' ROSES-centric "Appetite For Distortion" podcast (as transcribed by BLABBERMOUTH.NET). "And that would have been a huge dream for me because I knew the songs so well. Looking back on it, I'm kind of almost glad I didn't get the gig, because it was hard to be in the role I was in. And it would have been even more pressure and harder, I think, for me to have filled… With the childhood history I have with JUDAS PRIEST, it could have broken my heart, depending on the reaction of people. It doesn't matter how good you do the material — you're not the guy."

A year ago, Harnell released his cover version of the JUDAS PRIEST classic "Before The Dawn". In a message accompanying the YouTube release of the song, he wrote: "There's really no way to put into words the impact that @robhalfordlegacy and @judaspriest had on me and my decision to make music my life, but I'll try.

"It all started when my junior high school buddy Ed Gotti gave me my first PRIEST album 'Stained Class' in 1978 when I was just 15 years old. It blew my head apart. I listened to it every day, several times a day, it was my sonic bible that year. Of course I immediately went to the record shop and found 'Sin After Sin', 'Sad Wings' and 'Rocka Rolla'. I fell pretty hard for 'Sad Wings' as well. And I was the first in line to buy 'Hell Bent For Leather' when it came out later that same year and for me, it was the THE most bad ass album I'd ever heard or seen! That cover! I literally played the 8 track to death in my first car when I was just 16.

"What always struck me about Rob was his versatility. All the colors and textures in his voice, the use of various tones from beautiful to brutal and his ability to convey so many emotions in one single phrase. And of course his superhuman range and pure voiced stratospheric notes.

"I surfed nearly every morning and listened to these albums to and from the beach singing full blast and honing my craft, but I didn't know this at the time. I was literally training my voice without even thinking that's what I was doing. I was just in a musical trance. Next to surfing it was all I cared about and all I thought about and JUDAS PRIEST was driving my obsession.

"On the midst of all this heavy music there was this beautiful song 'Before The Dawn'. I just loved singing along to it so much. I performed it in my storyteller set on tour in Norway in September 2019 and it went over so well I figured at some point I'd record it. So here it is. With absolutely beautiful guitars from my brother @haape and a wonderful mix by my friend @rwikmark".

Tim "Ripper" Owens joined PRIEST in 1996 after being discovered when the band's drummer, Scott Travis, was given a videotape of him performing with the PRIEST cover act BRITISH STEEL. He recorded two studio albums with the band — 1997's "Jugulator" and 2001's "Demolition" — before PRIEST reunited with Halford in 2003.

Last November, former ACCEPT frontman David Reece said that he was also high on the list of candidates to replace Halford. "I was in Tennessee, and I hadn't fully retired yet, 'cause I had obligations before I decided to retire," Reece recalled in an interview with "Waste Some Time With Jason Green". "I'm on the phone with [PRIEST co-manager] Jayne Andrews every two days. I'm in contention with [PRIMAL FEAR singer] Ralf Scheepers and Tim Owens. It came down to, like, three or four guys, and I was one of those guys. And in those days, I had done SIRCLE OF SILENCE and some really heavy, intense, SABBATH-y kind of stuff, and Glenn Tipton [PRIEST guitarist] went, 'That guy's got it. Let's get him over to England.' It never came into fruition, but I was still the guy people were thinking about."

Nearly a decade ago, Scheepers confirmed to Metal Kaoz that he was at one time considered as a possible replacement for Halford. "The truth is that I was on the singers list for JUDAS PRIEST, but, as you all know, Tim Owens [got the gig] and it was a great decision for the band since he is a great singer," Ralf said. "In the end, we were all happy since, after all, PRIMAL FEAR started then in 1997. I was never invited to rehearse with PRIEST — that [would have been] the next step — and the name of Tim came out of the blue, so they chose him. But you know, that's life and I am also happy since I wouldn't be for long with JUDAS PRIEST since Halford has returned, right?"

Original JUDAS PRIEST guitarist K.K. Downing discussed the band's vocalist search in a 2019 interview with Noizz Eater. He said at the time: "Ralf Scheepers from PRIMAL FEAR, he was one consideration, 'cause he's great. But I think everybody thought that having somebody new was a better option, and, obviously, Tim was a great singer — still is. But it was very difficult to find somebody to replace Rob, as you can imagine."