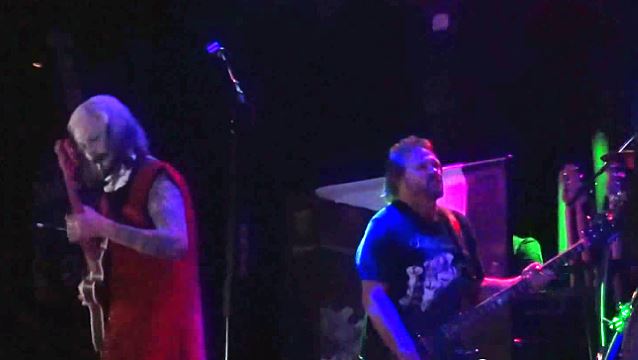 Former VAN HALEN bassist Michael Anthony and ROB ZOMBIE bassist Matt Montgomery (a.k.a. Piggy D.) joined former MARILYN MANSON and current ROB ZOMBIE guitarist John 5 (real name: John William Lowery) on stage on February 11 at the Whisky A Go Go in West Hollywood, California to perform the VAN HALEN classic "Somebody Get Me A Doctor". Video footage of the performance can be seen below (courtesy of California Rock News).

In the hardcover photo book "Eddie Van Halen" by Neil Zlozower, John 5 stated about Eddie: "Eddie's music came into my life in 1978, and from that point forward I knew exactly what I was going to do with my life. Not only did he reinvent the guitar forever, and influence all of us from that day forward, he even changed the way the guitar looked. How many of us started adding stripes to our guitars?!"

He continued: "I listened to each VAN HALEN record from start to finish so many times just to study his latest technique and wonder to myself, 'How in the hell did he just do that?' It was always a treat to hear with each new record how he'd come up with a new style. It started on 'Van Halen' with 'Eruption', then on 'Van Halen II', it was 'Spanish Fly', then he blew me away with 'Take Your Whiskey Home' on 'Women and Children First'. Then came 'Fair Warning'. Where do I start with that one? The opening of 'Mean Street' made my jaw drop! He just kept growing as a player and songwriter with each album so much that I'd wonder, 'What will he do next?' Then on 'Diver Down' he hits us with 'Cathedral' and 'Little Guitars' (he must have overdubbed himself, right?). Much to my surprise, he picked the high E string and played the low bass melody with hammer-ons and pull-offs at the same time! The album '1984' cemented everything about Eddie in one record for me. 'Hot For Teacher', 'Girl Gone Bad' and 'Drop Dead Legs' set yet another plateau for his plane ability and knack for writing smashes."

John 5 added: "Most kids' heroes are Superman, Batman and Spider-Man. Mine was and is Eddie Van Halen."