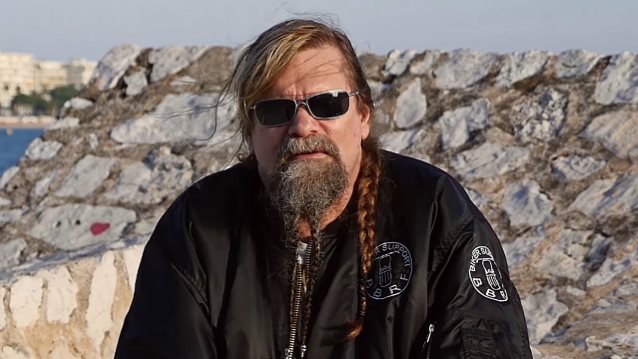 Speaking to the Swedish newspaper Upsala Nya Tidning earlier this month, Holmes stated about Lemmy's final days: "They said he didn't know he had cancer. C'mon! How do you get that sick and not know? I don't know."

He added: "Too bad [Lemmy] didn't die on stage. [Laughs]… That's where he probably wanted to die the best, you know. Like Dimebag."

In a brand new interview with Über Rock, Holmes clarified the comments he made to Upsala Nya Tidning, explaining: "Well, I didn't mean get shot! What happened to Dimebag was horrible. All I meant was it was a drag Lemmy passed away in his apartment and not on stage because he played live right up until the end. It wasn't like David Bowie who just passed away; he didn't play since 2006 or something. Lemmy kept playing until the end. That's what I meant. Going out on stage, having a heart attack or whatever. Just keeling over doing what he loved. I think that's what Lemmy always wanted. Nothing about getting shot. But now everybody thinks I said something about a shooting, like him getting shot in the head which is a bunch of shit. For anyone to even think that's what I meant is just... Why would somebody dream that up? It's bullshit."

Asked when he first met Lemmy, Holmes responded: "I think it was probably about '84 in London. It was around the time of the first W.A.S.P. album. He came along to one of the parties after a show. I think it was at a place called the Brewery. We used to hang around a lot in '89 / '90. It was a long time ago... I helped him go shopping for furniture for his apartment and stuff when he first moved over to L.A. Took him to a few places so he could get himself sorted. But we mostly just drank, got messed up and cracked jokes at each other. Then W.A.S.P. toured with MOTÖRHEAD in '97 for a while. There was a fight on the road at that time, but that was between Blackie [Lawless, W.A.S.P. mainman] and him. I never had no qualms with Lemmy. We only had one dressing room for both bands. I didn't care if they used the same dressing room as us, but Blackie wasn't happy, that's what it was over. I told him I didn't mind sharing anything with MOTÖRHEAD and he got all mad at me for that but, hey, I don't care."

Holmes in 2013 released a solo album called "Nothing To Lose". Chris composed, performed, and produced the music and vocals, and teamed up with Phil "Philthy Animal" Taylor to perform on and engineer the effort.