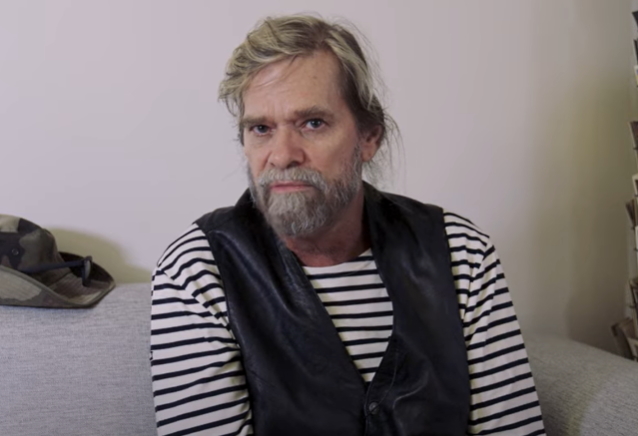 Ex-W.A.S.P. Guitarist CHRIS HOLMES: How I Was Diagnosed With Throat Cancer

Former W.A.S.P. guitarist Chris Holmes, who recently completed seven weeks of radiation therapy in his battle with cancer in throat and neck, discussed his illness in a new interview with France's Duke TV. Reflecting on how he was diagnosed, Holmes said (as transcribed by BLABBERMOUTH.NET): "In November of '21, my throat hurt real bad. I was taking throat lozenges and it just wouldn't go away. [My wife] Sarah goes, 'We're gonna go to a throat specialist,' and I did. And he [inserted] a camera in my nose and it goes down your throat. And he pulled it out, and he said something to my wife. And I go, 'Was it yeast infection?' And he shook his head, 'No.' And then he was talking to Sarah, and she kind of looked down to the ground, and I knew it was cancer. I go, 'Oh, man.'

"One third of everybody gets cancer on this planet, they say, so it just happened to be me," he noted. "And I drank and I smoked all my life. I didn't just smoke light cigarettes. I even asked the doctor if it could be from that. And he said he didn't know. He said, 'I couldn't put a stamp on what it is. It could be hereditary. It could be anything.'"

Chris went on to say that he is trying to stay "positive" in his battle with the disease. "At least the cancer I had was treatable," he said. "God forbid, a lot of people get cancer and they can't treat it. At least mine was treatable."

Holmes also spoke about his treatment, saying: "What happens is seven weeks of radiation — Monday through Friday. And the first you do the radiation, of the treatment, they give you chemo, and then you're supposed to do chemo halfway through and then at the end. My throat starting hurting. I couldn't drink water. I was taking morphine. I'd get the treatment and I'd just come home and just go straight to bed and [go] to sleep. And then Sarah, my wife, would wake me up at dinner time and try to get me to even drink something, and I couldn't drink. And she was almost crying because I was withering down to nothing. They kept telling me they were gonna put a tube in my nose. And that kind of scared me, getting that thing shoved in my nose and my throat, but once they put it in, it didn't bother me. And I got fed by a tube for a while.

"I finished [treatment] in April, so it's been four months, and I'm starting to feel a lot better," he said. "I'm not a hundred percent now. I get a real lot of phlegm in my throat, and it's real thick and gross. So if I sleep at night, it builds up and I wake up and I can't get any air, and I'll have to cough it up. And I have no taste. Everything I taste — I'm not gonna say it tastes like shit, but everything I taste just doesn't taste what it smells like. I just had a banana, and it didn't taste like a banana, but I ate the whole thing 'cause I know I've gotta start eating food."

Earlier this month, Chris told Canada's The Metal Voice that he hasn't heard from W.A.S.P. leader Blackie Lawless since his diagnosis. He said: "Blackie could have helped to pay for some of my treatment, but [he didn't]. But Nikki Sixx [MÖTLEY CRÜE] did. He gave me a lot of money. He was the first one; he forked over 500 bucks, and I love the guy for it. Thank you, Nikki. I love him for that."