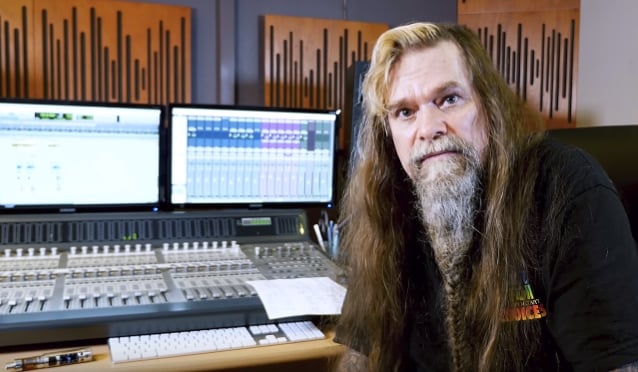 Former W.A.S.P. guitarist Chris Holmes has confirmed to The Metal Voice that he is planning to release a new solo album before the end of the year. "I've got all the songs written," he said in a new interview (see video below). "It's just we've gotta record 'em. We've had a few problems recording with people… I wanna use the drummer that I have now on the new songs, so he's gonna come in and play 'em. I personally like doing it myself on a computer, but [my wife and manager] wants to use actual recording playing with people. I've done it both ways; it doesn't matter."

Asked about the musical direction of his new material, Holmes said: "It's hard to explain. I don't go towards some direction. There's a song like BLACK SABBATH in there — it's real slow — called 'Touch Me And Die'. It's about being in a fire. But I don't try to go a certain musical direction. There's [a ballad] called 'In God's Hands'. In America, when a tragedy happens — someone dies or gets shot up in a church or run over by a car — you always see on the news, there'll be some person, and they go, 'How do you feel about this?' And they go, 'Well, it's all in god's hands now.' [Laughs] I had it written on the wall, 'In God's Hands,' and it all came together… The EP that I just did [2018's 'Under The Influence'] will be part of the new album. My favorite one is 'The Devil Made Me Do It', because the song is written about me as a teenager. What it says in the song, it goes, 'Don't tell me what to do / I wouldn't listen anyway / I've got no trust in the law / I don't care what they say / I love to drink and drive / I love to stay out all night / Get drunk with my friends / Get drunk and fight.' It's what I used to do. And then the second verse is about the cops chasing me in a car. And then the third verse is about being in court with a judge. [Laughs] And I'm proud of those lyrics. Every time I listen to 'em, I laugh at 'em."

Holmes will also be the subject of a documentary which has been in the works for the past several years. The film will focus on Chris's life in Cannes, France, where Holmes has lived since 2014.

"It's about me starting over in Europe, kind of, and, five years ago, the first bandmembers that I had in band, and going out on the road, and the assets we had," he explained. "We didn't have a big tour bus and we didn't have all the money behind us — labels and all that stuff. The reason why is there ain't no record labels anymore; there is no big money in this business anymore. Unless you're big already, you're stuck where you're at. And the documentary is kind of like being on the road and just interviews with people, the shows, and stuff like that, what goes on. The guy doing the documentary went to L.A. and talked to a lot of my friends in the past — just talked about me and what I used to do and what they thought. My sister is in there. He went and visited my mom. I think he talked to uncle. Just a bunch of friends that I'd known in L.A. and that I played with over the past years. Johnny Rod is in the there, Stet Howland, Doug Goldstein… People I went to high school with that were roadies for me, that were roadies that worked with W.A.S.P."

Holmes in 2013 released a solo album called "Nothing To Lose". Chris composed, performed, and produced the music and vocals, and teamed up with former MOTÖRHEAD drummer Phil "Philthy Animal" Taylor to perform on and engineer the effort.