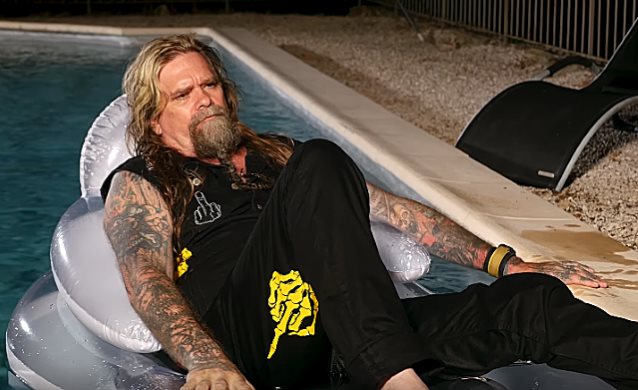 Former W.A.S.P. guitarist Chris Holmes is perhaps best known for the infamous scene in the 1988 movie "The Decline Of Western Civilization Part II: The Metal Years" in which he was interviewed while floating in a swimming pool, fully clothed and visibly quite intoxicated while his mother sat poolside. The interview stood out in stark contrast to the more light-hearted and humorous interviews conducted by director Penelope Spheeris, which mostly portrayed rockers as good-natured, though often dimwitted or deluded, party animals. During the interview, Holmes smiled drunkenly at the camera, deeming himself "a full-blown alcoholic" and "a piece of crap" despite his band's success, and punctuated his remarks by guzzling from three bottles of vodka. At the end of the interview, Holmes upends a full bottle of Smirnoff over his head as he rolls out of his inflatable chair and into the water.

Fast forward to 2017 and Duke TV has posted brand new pool interview with Holmes — conducted by his wife Sarah — which starts out with the same exact questions Chris was asked in the "Decline Of Western Civilization" scene. Check it out below.

Asked if he drinks very much, Chris said: "You've gotta drink something to stay alive. I drink Diet Pepsi, Gatorade, Powerade. I hate the water out of the tap. But I like Sparkletts. If you're asking about alcohol, no, I don't drink alcohol anymore. [I stopped] a long time ago — February 6 of '96. Why do I not drink anymore? After six DUIs, they throw you in jail, and it's really hard to drink in jail. And they'll make you quit, the government, or they'll lock you up."

He continued: "I've learned when somebody's drunk that they don't do really too much that's really constructive. They have a fun time, but they're not that smart. Drinking turns you into an idiot. A lot of people like to be idiots. I used to be one — probably the biggest one there was. But as you get older, things change.

"When I stopped drinking, I'd see all my friends drinking and they'd just turn into idiots. I was the one leading the pack anyway, so I'm not one to talk about being an idiot and drinking."

Asked if he thinks the "rock and roll lifestyle" turned him into an alcoholic, Chris said: "Drinking alcohol gives you something to do when you're on the road. If you don't have alcohol and you do drugs or whatever, you need something to do, something to keep you preoccupied. Drinking's easy, 'cause you've always got alcohol and everybody drinks at shows."

"The Decline Of Western Civilization" box set features a new 2K high-definition scan of each film, supervised by director Penelope Spheeris. In keeping with the spirit of the rebellious times in which they were shot, the vintage aspects have been respected, and the films retain their original feel.

A couple of years ago, Spheeris spoke to Goldmine magazine about the Holmes scene in "The Decline Of Western Civilization Part II: The Metal Years". She said: "When I shot Chris Holmes, you know, I thought we didn't get the interview. I remember saying, 'We're going to have to reshoot this.' Because we didn't get anything. The guy's just sitting there screwing off and we didn't get anything. And then I saw Jon and Val [Jonathan Dayton and Valerie Faris], who are the producers, and I told them, we're going to have to reshoot that interview with Chris Holmes. And they said, 'Well, too bad, because we don't have enough money to reshoot it.' So I tried to cut something together and include it. I would never have imagined it would be the most talked about and kind of most memorable moment of the movie."

Spheeris offered more details about how the scene was shot during a separate interview with Rolling Stone. She said: "I don't remember if the pool was my idea or Chris's idea, but it was my idea to have his mom come down, 'cause I knew Sandy [Holmes]. She looks like she knows how far she can go with what she says to him. Like, she can't be too critical or he's just gonna go off on her.

In a 2014 interview with Metallväktarna, Holmes stated about his appearance in "The Decline Of Western Civilization": "I get a lot [of questions] about that. [People wanna know], 'Was it alcohol? Were you drunk?' Or whatever. Yeah, I was drunk. I'm not known to be a liar. In fact, I was real drunk; I couldn't even talk. So a lot of people ask me, 'How do you feel about that being on TV?' or whatever. The only thing I don't like is where some kid will come up to me and go, 'Man, that's the coolest! I wanna live like that.' And, to me, personally, that's, like, me going down the tubes. And why would somebody wanna live like that?"

STEEL PANTHER singer Michael Starr told The Verge that the Holmes scene in "The Metal Years" "shaped my whole career, to be quite honest with you. At that point, heavy metal was at its peak. It was awesome to be drunk, floating in a pool. You knew you had a disease and you were going to kill yourself eventually, but that was cool back then. People just looked at that and said, ‘Wow, this guy knows how to party. Everybody knows how to party.'" 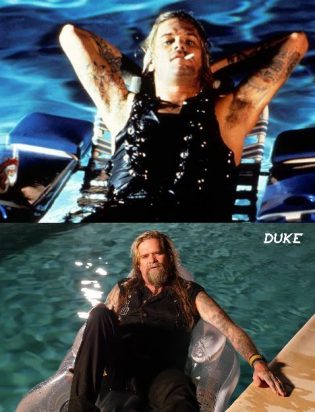