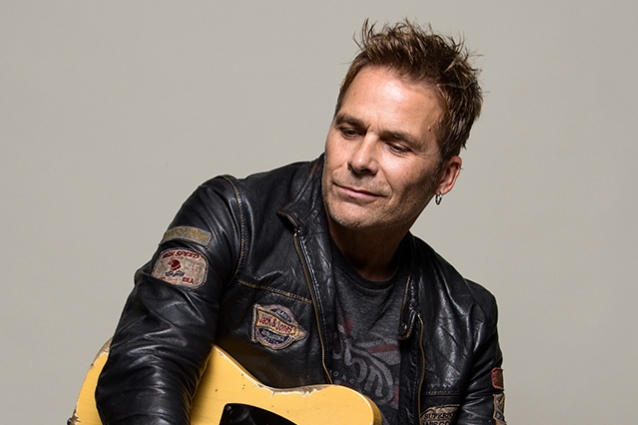 Mike Tramp says that he didn't see any U.S. royalties from WHITE LION's biggest hits for two decades because the IRS claimed that he owed the federal government nearly $1 million in unpaid income tax.

"We had some big hits and we sold a lot of records," he said during an appearance on today's (Tuesday, February 12) edition of SEX PISTOLS guitarist Steve Jones's radio show, "Jonesy's Jukebox", on the 95.5 KLOS station in Los Angeles (see video below). "But where were the people when we really needed them? Where were the accountants? Our accountant at that time forgot to file the tax return in our biggest year. And I remember three weeks after my son was born, I was actually living in a guest house over in the [San Fernando] Valley. I owned a '58 pickup truck with a Cadillac engine, and you had to start it with a screwdriver. Basically, just saying that's how low I was on cash. And I go out to the mailbox and there's a letter from the IRS, and it says, 'You owe $950,000.' And I think I had $2,200 in my checking account. I didn't have a savings [account]. And Vito [Bratta, WHITE LION guitarist] got hit the same way. And that's really just how it all ended up. So I had no money to pay them. So, basically, for the next 20 years, they put a lien on all income for Mike Tramp in America — my royalties. And I had actually forgotten that I ever had a hit, that I ever made any money until one day, a new accountant — he was just taking care of some old paperwork — [came to me] saying, 'You actually have a check coming in now. They have let you go.' So 20 years to pay off $950,000. So I've never had a manager that guided me well."

In the 28 years since WHITE LION broke up, Bratta's public profile has been virtually nonexistent, while Tramp has remained active, recording and touring as a solo artist and with the bands FREAK OF NATURE, THE ROCK 'N' ROLL CIRCUZ and, more recently, BAND OF BROTHERS. Tramp also attempted to revive WHITE LION with the 2008 album "Return Of The Pride", featuring new members. Two years later, Tramp ceded ownership of the name WHITE LION to Bratta in an out-of-court settlement.

Tramp's new solo album, "Stray From The Flock", will be released on March 1 via Target Records.