"In Hatred's Flame" is scheduled for release on July 29. Armed with a diverse array of influences from IRON MAIDEN, JUDAS PRIEST and YNGWIE MALMSTEEN to SLAYER, MARDUK and DEICIDE, the CD "showcases the band's unique blend of brutality and finesse," according to a press release. The album features cover artwork by legendary artist Kris Verwimp, who has previously worked with ARCH ENEMY, MARDUK, ABSU, OLD MAN'S CHILD, IMMORTAL and many others. The limited vinyl edition will include deluxe packaging and a digital download card and will also be available as a numbered mail order-only deluxe colored vinyl edition.

On Friday, July 18, EXMORTUS shot a video for the song "Triumph by Fire" from "In Hatred's Flame". Filming took place during the Masters Of Disaster showcase at the Mutant House in Chino, California. Also appearing on the bill were AVENGER OF BLOOD, WARBRINGER, BONDED BY BLOOD, MELTDOWN, MUTANTS OF WAR, PRIMEVIL and OBLITERATOR.

Catch EXMORTUS on tour with BONDED BY BLOOD and Heavy Artillery labelmates PHANTOM WITCH later in the year. 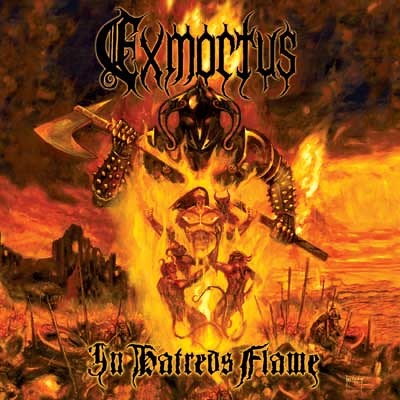