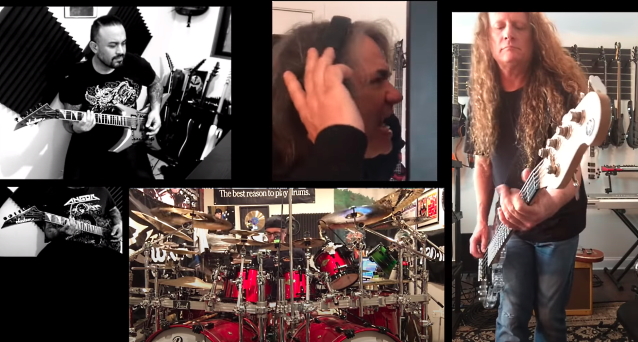 OVERKILL/SHADOWS FALL drummer Jason Bittner has teamed up with EXODUS singer Steve "Zetro" Souza, EXODUS bassist Jack Gibson and ANGOR/ex-SHADOWS FALL guitarist Felipe Roa to record a quarantine cover version of MEGADETH's "Wake Up Dead", with each musician separated in his own home.

Bittner uploaded a video of the performance to his YouTube channel, writing in an accompanying message: "Just a bunch of metalheads jamming a cover for fun under quarantine..."

In a recent interview with Metal Pilgrim, Bittner spoke about what the touring circuit might look like post-pandemic.

"I don't think it's gonna stay the same," he said. "I'll be quite honest with you: I just don't think that we're just gonna go like this and be back to regular life in a couple of months. It's just not gonna work like that. I think that people are gonna be apprehensive, people are gonna be standoffish. I know people are gonna wanna get out too. Trust me — I'm just as guilty as everybody else. I'm going nuts being here [at home]. I love my wife, I love being here with her and the cats, but one trip to the store a week? That's not enough for me. I know I can go out of my house and be in my yard and stuff, but when you don't have that daily routine anymore, it turns into same stuff different day, basically.

"I really don't think the music business is gonna bounce back anytime soon," he added. "It's gonna be a year, I think, before you're even seeing bands that are going on full-fledged tours. I hope I'm wrong — I really do. And I think if anything, I think as far as my situation, OVERKILL, we're very lucky that this is coming at the heels of a tour cycle and not at the beginning of a tour cycle. It's worse for bands like TESTAMENT who just released a record and you're forced to stay at home. But who knows?