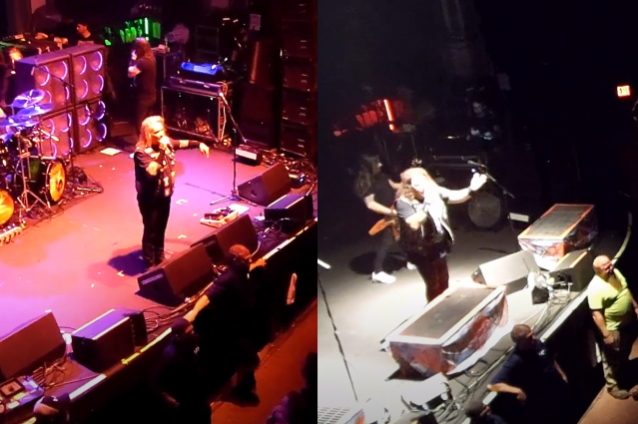 EXODUS and TESTAMENT paid tribute to THE BLACK DAHLIA MURDER vocalist Trevor Strnad at the Columbus, Ohio stop of their "The Bay Strikes Back" tour.

At one point during EXODUS's set Wednesday night (May 11) at Newport Music Hall, singer Steve "Zetro" Souza told the crowd: "Before we go any farther, I have to dedicate this show to Trevor from BLACK DAHLIA MURDER. Another one, another great one we lost. So make some noise for Trevor."

Later in the night, TESTAMENT singer Chuck Billy introduced the song "WWIII" by telling the audience: "We're gonna play one right now and dedicate this one to Trevor of BLACK DAHLIA. C'mon, make some noise, everybody."

Video of both dedications can be seen below (courtesy of Singular Vision Productions).

Strnad's death was announced earlier on Wednesday by his THE BLACK DAHLIA MURDER bandmates on social media. They wrote: "It is with deep sadness that we announce the passing of Trevor Scott Strnad. Beloved son, brother, and Shepard of good times, he was loved by all that met him. A walking encyclopedia of all things music. He was a hugger, a writer, and truly one of the world’s greatest entertainers. His lyrics provided the world with stories and spells and horror and whimsy. It was his life to be your show." The band also shared the telephone number for the National Suicide Prevention Lifeline.

In an April 2021 interview with Metal Injection, Strnad spoke about his battle with depression and alcohol dependence. At the time, he said: "At the rate I drink while we're gone on tour, it's just not sustainable for getting older. Being 40-plus and being able to do what I do well and not look like a shithead, I've gotta be better to myself. So that's really the impetus [for quitting drinking]. That's the heart of it. It's not that… I know I'm no fun [when I'm drinking]… It's to the point where I'm having 10 drinks a day plus to go on stage. And two weeks into it, I've been hung over every single day. I'm chasing that hangover with just more liquor, until the end of the tour [by which time] I have doubled my intake just to get by, basically. And it's not fun — it's disgusting; it sucks."

Strnad also revealed that he was about to undergo ketamine therapy as a way of treating his depression. "It's intravenous," he said. "They pump ketamine into you over the course of two weeks — three days a week for two weeks. And they put you in this euphoric state for a couple of hours. And eventually you've done it enough to where your brain makes new passageways, new synapses, and you stop doing these cyclic kind of thinking — self-defeating. I've been a lot better now, but there was times when shit got pretty fucking dark for me over the last two years. You can go there as an emergency if you're ideating suicide really crazily — they can take you in on an emergency basis. You're basically high as fuck and euphoric as fuck, and they just give you all these great chemicals — you release all these happy chemicals and stuff like that. And they just keep doing that to you until you kind of rewrite the way you think.