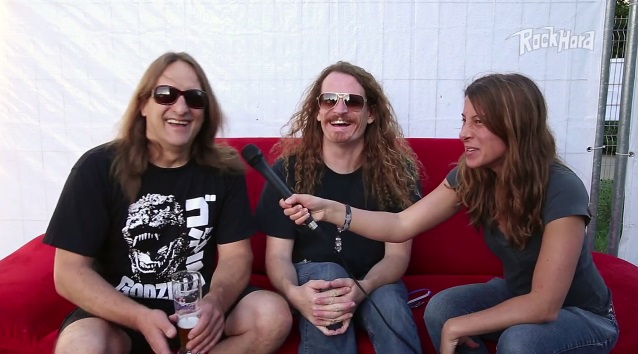 EXODUS Bassist: ROB DUKES And Rest Of Band Had 'Different Ideas About What Album We Wanted To Make'

Rock Hard magazine conducted an interview with drummer Tom Hunting and bassist Jack Gibson of veteran San Francisco Bay Area thrashers EXODUS at the Bang Your Head!!! festival on July 11 in Balingen, Germany. You can now watch the chat below. A couple of excerpts follow (transcribed by BLABBERMOUTH.NET).

On the departure of EXODUS' singer of the past nine years, Rob Dukes, and the return of his predecessor, Steve "Zetro' Souza:

Jack: "You know, we [Rob and the rest of EXODUS] were just kind of both going in different directions, what we wanted in the band. We were doing the new record, so it was important, and we were just kind of having different ideas about what album we wanted to make. So we just decided that it was time to part ways with Rob."

"I love Rob, and I love his singing, and I really love everything that he did with us — [but] Rob is a little more punk rock, kind of New York hardcore, and we're West Coast thrash, long-hair, patched vest-type stuff. So we were just kind of clashing a little bit with ideas and the way the delivery should be, and just different things like that. You know what I mean!? So come album time, that was important."

On how EXODUS got in touch with Zetro to ask him if he wanted to rejoin the band:

Tom: "That was pretty easy. He lives in the Bay Area, he lives very much near us. He came ready to work. He jumped right in there with six hours notice and was ready to kick ass. He was hungry for this. I mean, this is a very important album for us. This is album No. 10, studio record. I don't count 'Let There Be Blood' [re-recording of EXODUS' classic 1985 debut, 'Bonded By Blood', with Dukes on vocals]. Of all the studio releases, this is No. 10. It's a pretty important record, and we all recognize that. A lot of people don't even get to be in a band that makes ten records — very few people do — so we're really fortunate, and we take it seriously."

On EXODUS' forthcoming album, "Blood In, Blood Out":

Jack: "It's getting mixed right now, and I think it's coming out October 25. It's good, man. It's got some throwback elements, some real short, thrashy old-school stuff, as well as some of the epic, dark EXODUS-type shit. So I think it's a really good record, man. And Zet kind of meshed right in with it and made it sound really good."