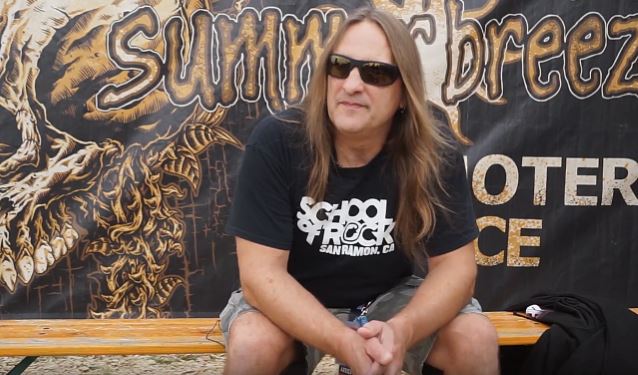 Thomann conducted an interview with drummer Tom Hunting of San Francisco Bay Area thrashers EXODUS on August 18 at the Summer Breeze festival in Dinkelsbühl, Germany. You can now watch the chat below.

Asked if he listens to other genres of music, Hunting said: "Oh, man, when I'm at home, I'll have days where I'll just [listen to] ZZ TOP, days where I play JOURNEY. Sometimes back even farther to old funk music, COMMODORES, IKE & TINA TURNER, that kind of stuff. I like all kinds of music."

Regarding what the coolest thing is about being a touring musician, Hunting said: "When I was a kid doing it, it was more about the party, and now that I'm an older man still doing it, I think it's more about the journey. Meeting these people and having crew people that are friends from over here that have worked with us for years and years, there's no other business you can be in, I think, to form those kind of friendships, and I think it's special. And the two times that I stepped away from the band, I really missed that part of it."