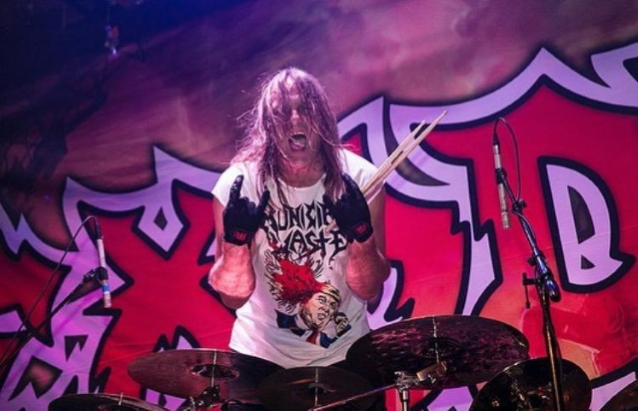 EXODUS drummer Tom Hunting has been diagnosed with squamous cell carcinoma (SCC) of the stomach.

He said: "Today I will be starting treatment for a squamous cell carcinoma. It's a gastric tumor that was diagnosed in my upper stomach in February.

"Ok, you've heard the bad news. The good news is he feels great physically! I'm gonna beat this like a fucking snare drum that owes me money!!! I've had great doctors and a great support system that is an army in itself. I'm ready for the fight!

"We have a lot to celebrate this year with the release of what will be a career-defining album and tours to follow! I'm stoked for everyone to hear it, and even more excited to get out there and play some of it! I will see you all very soon! CHEERS!!!"

EXODUS guitarist Gary Holt added in a separate statement: "Tom starts his first round of chemo today, so I know he will feel the positive vibes being sent his way.

"EXODUS will delay the release of the new record so that when Tom has defeated this, he will be back to full strength to hit the road and pummel his drums like only he can! When he has kicked cancer's ass like we know he will, we will resume kicking YOUR asses with the sickest record yet!

"All love and positivity to my brother."

EXODUS recently completed work on its new album, "Persona Non Grata", for a tentative summer release via Nuclear Blast. It will be the follow-up to 2014's "Blood In Blood Out", which was the San Francisco Bay Area thrashers' first release since the departure of the group's lead singer of nine years, Rob Dukes, and the return of Steve "Zetro" Souza, who previously fronted EXODUS from 1986 to 1993 and from 2002 to 2004.

"Persona Non Grata" will be EXODUS's first since the completion of SLAYER's final tour. In 2011, Holt began filling in for Jeff Hanneman at SLAYER live shows, and became the band's full-time co-guitarist as of 2013, while remaining a member of EXODUS.