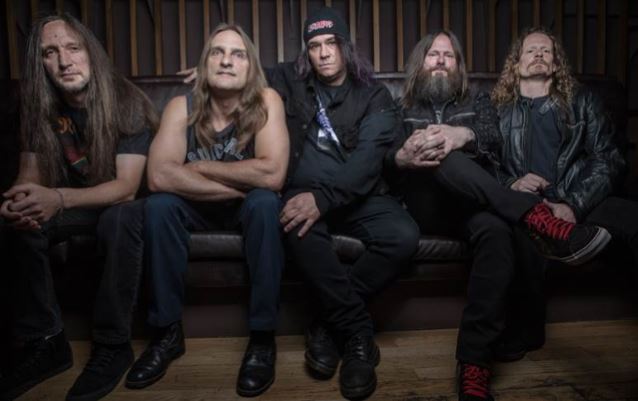 EXODUS: Entire 'Blood In Blood Out' Album Available For Streaming

"Blood In Blood Out", the new album from San Francisco Bay Area thrash metal veterans EXODUS, can be streamed in its entirety below. (Note: It is also available at Yahoo! Music.) Due in North America on October 14 via Nuclear Blast, the CD art was illustrated by Swedish artist Pär Olofsson, known worldwide for his incredible renderings that have graced the covers of countless heavy metal albums, including EXODUS' "Let There Be Blood".

Crafting an industrial sound bed on the intro to "Blood In Blood Out" opener "Black 13" is electronic music producer Dan the Automator (GORILLAZ, MIKE PATTON, DELTRON 3030).

"[Dan and I] ran into each other a couple times," shares EXODUS guitarist and songwriter Gary Holt. "I knew what I wanted to hear and I knew he could do it, and could do it that day. So we sent him a file with the drums and guitars we already had there and just told him to go crazy with it."

TESTAMENT frontman Chuck Billy lends his signature roar to the track "BTK", one of the first songs recorded by returning vocalist Steve "Zetro" Souza, who recently said: "Chuck and I have known each other forever. We work really well together; we know each other really well. So if I'm doing my vocals and he's there, I can trust him to go, 'No way, Zet, [it] doesn't sound good like that. Do it like this,' or, 'Yeah, that's killer.' If he says it sounds killer, I know it is."

Original EXODUS guitarist Kirk Hammett, who has been a member of METALLICA for the past 31 years, contributed a solo to "Salt The Wound", which can be streamed in the YouTube clip below.

"This was actually the first time Kirk got to play on an official EXODUS release," states Holt. "He did the early demo, and then joined METALLICA and didn't do anything with us after that. So he was totally gung-ho about it. He came down and ripped out a bunch of takes and we picked the best one and then had a barbecue and drank beer."

He added: "I play a pretty cool solo, and then Gary comes in and plays another solo, and you know what? I listened to that and thought, 'Wow, it's 1982 all over again and here we are, Gary and I are trying to cut each other's heads off with our guitar solos.' Nothing has changed much in the last 30 years. I love it. I love those guys. I've only known them for most of my life, so I'm really happy that I finally got to record with them."

The digital version of "Blood In Blood Out" will include the digital bonus track "Angel Of Death" (ANGEL WITCH cover).

The album's Japanese edition includes the "Protect Not Dissect" bonus track featuring Rat from THE VARUKERS/DISCHARGE.

"When I was working on the record, I was sitting around watching TV series like 'Gangland' and all these locked-up prison reality shows," said Holt. "And I thought, 'Yeah, that's like EXODUS.' It's a brotherhood. You bleed to get in, you bleed to get out.

"I've been doing this kind of music since I was a teenager, and I'll be doing it 'till I can't physically do it anymore."

The concept for the art was impressively envisaged by Olofsson based on the album title alone, as Gary Holt explained: "The concept came from Pär Olofsson. I fed him the title and he immediately came up with the final concept, and it's perfect! One of my favorite covers we've ever done and it fits the title and theme to a T!"

The album can be pre-ordered from the Nuclear Blast USA webshop in CD, digipak, and 2-LP exclusive yellow vinyl formats. Bundles include a t-shirt with exclusive artwork for North America + a poster (while supplies last).

EXODUS will is touring South America in October before returning for a supporting run in November with fellow metal titans SLAYER and SUICIDAL TENDENCIES. The Scion-sponsored leg of this U.S. tour launches on November 11 with two shows at the Fox Theater in Oakland, California. 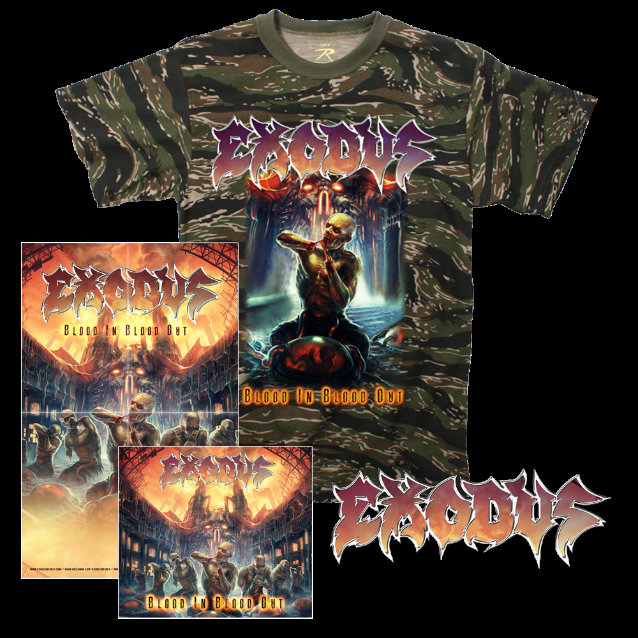