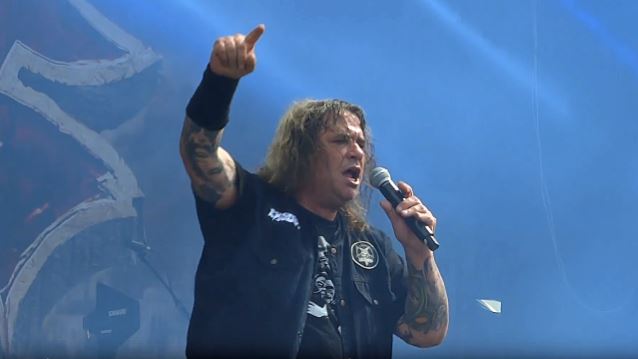 EXODUS Frontman: 'I Can Guarantee You That We Are Writing New Songs'

EXODUS singer Steve "Zetro" Souza was interviewed on a recent edition of "The Classic Metal Show", which is heard live on Saturdays from 9 p.m. to 3 a.m. EST at TheClassicMetalShow.com. You can now listen to the chat below. A couple of excerpts follow (transcribed by BLABBERMOUTH.NET).

On EXODUS's plan to wind down the touring cycle for 2014's "Blood In Blood Out" album and commence the songwriting and recording process for the follow-up effort:

Zetro: "I'm not gonna say that we're not gonna do something where if a tour comes up, we may… 'Cause we never really headlined for 'Blood In Blood Out'. But I can guarantee you that we are writing new songs. After the first of the year, we have spoken amongst ourselves, our management, our agents, and we understand the position we're in. We know what timing means and things like that, and it's all very much so. I'm not saying it to try to keep everybody at the edge of their seat.

"We have to go to Japan. We're doing [the] Loud Park [festival], which is in between the [European tour with] OBITUARY, PRONG and KING PARROT. But we come home November 27th. I'm gonna say people are probably gonna relax through the Christmas months, but as the end of January comes around, I'm sure Tom [Hunting, drums] and Gary [Holt, guitar] are gonna get together, and that's when the process is gonna start. We're shooting for next fall for it to [come out]. And I'm ready to work, and I'm sure everybody in the band is as well; we've discussed this already. So it's definitely something… We're not going, 'We're gonna try to get together. We wanna take some time off.' This is not the time to take time off. We're playing very good together as a unit, and the music is really great now. And the other bands that are along with us in our genre are also doing so well, so I think it's something that we all need to just keep capitalizing on and keep playing. As long as you guys are there to hear it, we're gonna be doing it, man."

On how he has been received by the EXODUS fans in the two years since he rejoined the band:

Zetro: "Well, I'd have to say a lot love — very minimal, if any hate at all. I mean it. Just to be honest with you. And I'm not plumping it. I still get… I think with two hundred and forty-something shows the other night in Frankfurt, since I've rejoined, and I'm still getting, 'I'm glad you're back. It feels so good that you're back with them.' I'm still hearing it every night. So I appreciate them.

"You know, I'm a fan of bands when, at the inception of the band, the lineup was a certain lineup — I get that; I really do. I'm not saying John Bush didn't do a great job in ANTHRAX — he did a hell of a job in ANTHRAX — but I love Joey [Belladonna] singing for ANTHRAX, and 'For All Kings' is amazing, and it just goes to show that. And I think that that is kind of how the EXODUS fans looked at it. The guy that they listened to, even though [Paul] Baloff was a very big part of the EXODUS sound and the EXODUS direction and the EXODUS attitude, I think the people looked at me as, 'Well, that guy was kind of there.' Like Paul Di'Anno was the first singer of IRON MAIDEN, but Bruce [Dickinson] is the voice. I'm not saying Blaze's [Bayley] records weren't good, 'cause the records Blaze Bayley did with IRON MAIDEN, I think that was a really dark and heavy time for IRON MAIDEN, and if you listen to those songs, they're good songs. And I think that maybe that's what happened in my case.

"'Blood In Blood Out' was a well-written and well-recorded record on everybody's part in the band, and Jack [Gibson, bass] did a great job engineering the album and getting the best out of everybody. And then, of course, [producer] Andy Sneap taking it and doing his work. And Gary and Lee [Altus, guitar] writing great riffs, and Tom always having that signature EXODUS drum beat that is just different. It's thrash, but it's got just a little bit of a groove; it's a very forward and very distinctive sound. So I think a lot of those things had to do with it. So [it was] definitely a success from all angles."