Lucem Fero recently published an interview with EXODUS guitarist Gary Holt, conducted in late 2008 by Welsh interviewer Anthony Morgan. Topics of discussion included "Let There Be Blood", the controversial re-recording of EXODUS' classic 1985 debut album "Bonded by Blood", his response to criticism regarding the project, the album's artwork, bonus track "Hell's Breath", and "Bonded By Blood"'s influence on the thrash genre. Several excerpts from the interview follow below.

On how "Let There Be Blood" came to fruition:

"For years, we'd discussed re-recording 'Bonded By Blood'. We never had the time or the resources to re-record the album, however, since we wished to independently release the album. In 2008's summer, we had the time to enter the studio, and make the project a reality."

On criticism regarding the project:

"I don't get mad about the critics. It's a compliment for someone to say our debut is such a classic that we shouldn't touch it, though I tell individuals that very same thing; this doesn't make the original disappear in a cloud of smoke. 'Bonded By Blood' will always be there, should always be heard, and will forever be our shining moment. Consider 'Let There Be Blood' as nothing more than a companion disc. Through this album, hopefully listeners might actually discover the original."

On how he feels the late vocalist Paul Baloff would feel regarding the project:

"As long as it was something he couldn't sing on, I think Paul would fucking love it. It's a real testament to Paul that, after recording one album throughout his entire life, he's rightfully considered a legend. How many people can you say that about? When Tom [Hunting, drums] and I did the drum tracks, it brought back a lot of insane memories from the original sessions. We stayed at the studio on this big farm, and had insane parties every night, with friends fistfighting, shit getting broken, and general mayhem. After so much drinking, it was no small wonder we got such great work done in the afternoon. We were always about a good time though, and that was one of the best."

On new singer Rob Dukes' feelings towards the project:

"He was more than slightly nervous about recording 'Let There Be Blood', but I told him to just listen to the original, let Paul soak in, and do him justice. I told him not to sound like a parody, but to bring some of Paul's performance out, as well as his own style. I think he nailed it. We talked about re-recording 'Bonded By Blood' with Paul before he died, but we were all so fucked up that we never got much completed. Plus, we need resources to record it ourselves, although not much."

"We never recorded 'Hell's Breath' back then, but decided to cut it this time as Tom and I finished early, and had some time to use. We said, 'Fuck, let's record an old one,' and 'Hell's Breath' is the old one. We wrote it back then, namely Kirk (Hammett) and I. Nothing unique occurred during the songwriting process, which just consisted of two guitarists writing some riffs. The lyrics are good old fashioned EXODUS Satan-type fare."

On "Bonded By Blood"'s influence:

"I think its influence is felt everywhere — I hear elements of those riffs in new material all the time. We brought a level of anger and violence that was new to thrash though, but paid homage to our own heroes all through, from MERCYFUL FATE, to VENOM, to ANGEL WITCH, and to MOTÖRHEAD."

As previously reported, "Let There Be Blood" has been released on limited-edition red vinyl. Only 2,500 numbered copies are available via Zaentz Records' web site. 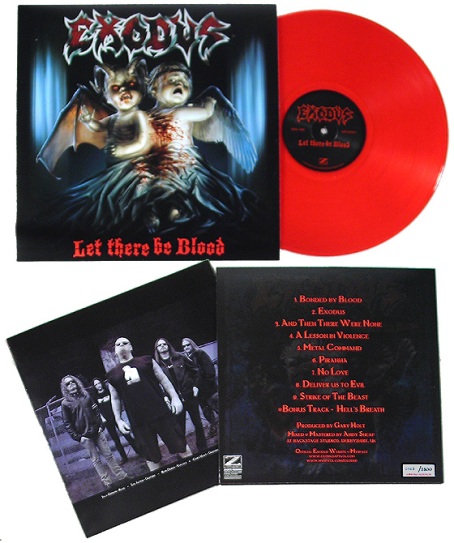 "Bonded By Blood" 2008 recording (with Rob Dukes on vocals):