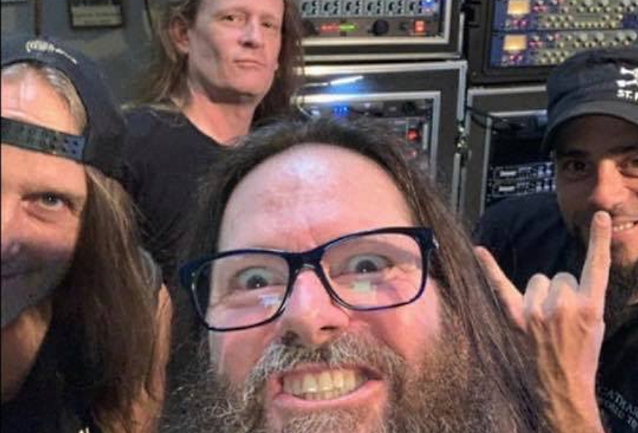 EXODUS Is In Pre-Production For Long-Awaited New Album

EXODUS has commenced the pre-production for its long-awaited new album.

Last month, Souza told Rock Immortal Productions' "Rock Talk" live interview series about the musical direction of the new EXODUS material: "I know what you guys know, and I've heard nothing. But I have had conversations with [guitarist Gary Holt] and [drummer] Tom Hunting, and they assure me it's really special [and] it's really crushingly heavy. People are definitely gonna be blown.

"We're gonna do it up at Lake Almanor," he continued. "Tom bought a house up in the mountains, and we are actually gonna have all the gear sent up there, I think, the last week of August. And I would say all of the month of September into October, the five of us will be in the mountains putting together — like little doctors, like scientists — making the new EXODUS.

"Talking to Tom, the songs are really, really heavy. And there's a lot of room for a lot of things to happen on those songs, from what I understand. I think it's gonna be a very special album, it looks like. I can't wait to hear it. I did hear some stuff when we were on 'The Bay Strikes Back' [European] tour [in February and March]. When we were starting soundcheck, Gary and Tom always seemed to get up first and were jamming on stuff. If that was some of the stuff… Ted [Aguilar] from DEATH ANGEL would be coming up to me, like, 'Zet, is that new EXODUS?' And I'm all, 'I'm hearing it like you guys are. So I would say, yes, it probably is.' But up till now, I haven't had anything sent to me. That usually is the process — Gary will send me stuff, and he'll also send me, like, 'Okay, I wrote the lyrics to this. It goes like this.' That has yet to come."

According to Souza, the new EXODUS album will mark the band's first time recording together in many years. "We are all gonna be up there at the same time, which we have not done in a long time," he said. "I think 'Tempo Of The Damned' [2004] was the last album, at least with me, that I remember we were all in close proximity of the recording. 'Cause when I did 'Blood In, Blood Out', Gary was on tour with SLAYER, and Jack [Gibson, bass] was tracking the record. So it was basically him, myself and Lee [Altus, guitar], or him, myself and Tom doing the vocals. This way, we're working with another guy, and everybody's gonna be there. The way Gary explained it was, [once] I've done vocals, Lee will go in the rest of the day, so we're gonna just kind of keep working. 'Cause I guess we'll all be up there at the same time; it's gonna be fun.

"I'm very excited to do it like that. I think that, honestly, when the whole band is there, that's when the best stuff comes out," he explained. "And the three records where the whole band was there, that I can remember, I would say 'Pleasures [Of The Flesh]' [1987], 'Fabulous [Disaster]' [1989] and 'Tempo'. And those three records were the records that I was a part of when the band… 'Impact [Is Imminent]' [1990] and 'Force [Of Habit]' [1992] were kind of done, this guy flew in, this guy flew out, that kind of thing — they were done like that — but 'Pleasures' and 'Fabulous' and 'Tempo', we were all there. And a lot of people think that those are some of the best records with some of the best songs on them, and I agree with that. So hopefully that same magic is gonna happen again."

EXODUS's next studio album will be the group's first since the completion of SLAYER's final tour. In 2011, Holt began filling in for Jeff Hanneman at SLAYER live shows, and became the band's full-time co-guitarist as of 2013, while remaining a member of EXODUS.

"I have to thank the fans for being so patient," Souza said. "We're fortunate they're being so patient, 'cause they knew what Gary was doing. Especially in the last two years — from January '18, he was locked in to finishing the world tour with SLAYER, and none of us wanted to have him try to jump back and forth doing a new record with EXODUS while he had little breaks with SLAYER. We wanted him to obviously be able to concentrate on the music fully without any distractions, and that's what the writing of this record has been — he's completely written this record with no other distractions. Not meaning that SLAYER was a distraction, but he has no commitment to going on tour or playing or having to do anything; it's just EXODUS now. So I'm way excited. I'm very happy that it's finally coming to that point. I can't wait for everybody to hear it. I know it's gonna be great."

It is finally happening. Pre production is starting now.