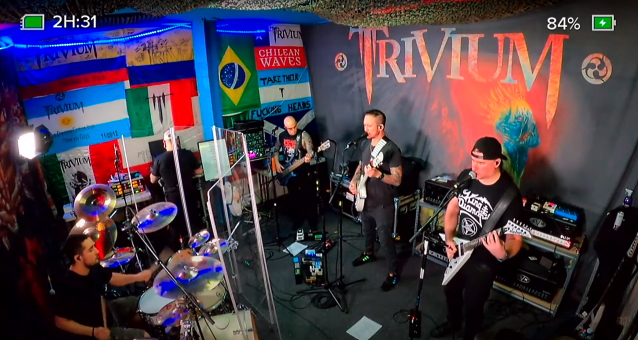 TRIVIUM paid tribute to POWER TRIP frontman Riley Gale by performing a cover version of the latter band's song "Executioner's Tax (Swing Of The Axe)" during a livestreamed concert on Saturday, August 29. The free show was streamed on TRIVIUM singer/guitarist Matt Heafy's Twitch channel live from the band's rehearsal space in Orlando and can now be seen below. In addition to a new and limited-edition merch drop, the set was filled with deep cuts that fans may never have seen live before.

POWER TRIP confirmed Riley's death in a statement on August 25.

TRIVIUM's ninth full-length album, "What The Dead Men Say", was released on April 24 through Roadrunner Records. The LP, which was produced by TRIVIUM and Josh Wilbur, is the follow-up to 2017's "The Sin And The Sentence". That effort marked the band's first release with drummer Alex Bent, who joined TRIVIUM in 2016.

As previously reported, TRIVIUM's North American tour with MEGADETH, LAMB OF GOD and IN FLAMES has been rescheduled for 2021 due to the coronavirus pandemic.