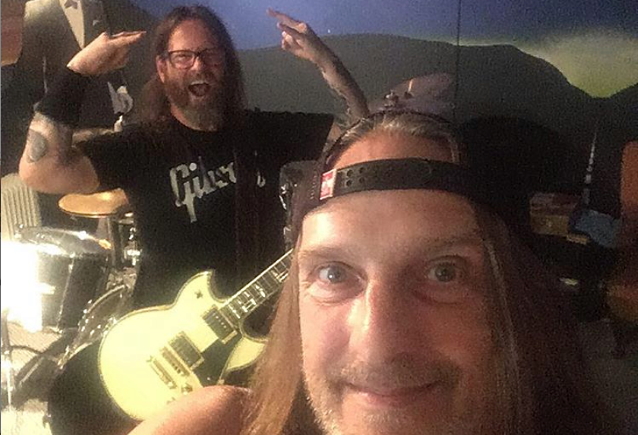 EXODUS Is Working On 'Insane' New Music: 'The Aggression And Energy Level Is Too High To Measure'

EXODUS guitarist Gary Holt and drummer Tom Hunting are working on material for the long-awaited follow-up to 2014's "Blood In Blood Out" album.

On Friday (July 17),Gary posted a photo of him and Tom at the jam room at Hunting's Northern California home, and he included the following message: "We are creating some INSANE shit! I'm telling ya, this record is gonna be pure fire. The aggression and energy level is too high to measure"

"Blood In Blood Out" was EXODUS's first release since the departure of the group's lead singer of nine years, Rob Dukes, and the return of Steve "Zetro" Souza, who previously fronted EXODUS from 1986 to 1993 and from 2002 to 2004.

This past April, Souza confirmed that Holt's COVID-19 diagnosis "put a damper" on EXODUS's ability to move forward with the songwriting process for its new LP. "By now, we would have been working together for probably a good month on it," Zetro explained. "Gary's got many riffs and many things that he needs to put together. It starts with him and Tom, basically. Everybody knows, drummer and guitar, and that's how EXODUS has always done it. But because of this distancing, that's been kind of impossible to do, so that's put a damper on it. But I can guarantee you, I did hear some of the stuff that they were playing around with in soundcheck on [the recently completed] 'The Bay Strikes Back' [European] tour, and EXODUS fans are gonna be very pleased. Again, I'm not hearing full songs — I'm just hearing riffs and pieces and stuff like that — and I'm [like], 'Wow!' I'm not saying — it's just pretty damn heavy."

Holt joined EXODUS in 1981 shortly after the band's formation, and has been its main songwriter ever since. Holt has performed on every EXODUS album, and is considered highly influential in the world of thrash metal. In 2011, he began filling in for Jeff Hanneman at SLAYER live shows, and became the band's full-time co-guitarist as of 2013, while remaining a member of EXODUS.

We are creating some INSANE shit! I’m telling ya, this record is gonna be pure fire. The aggression and energy level is too high to measure