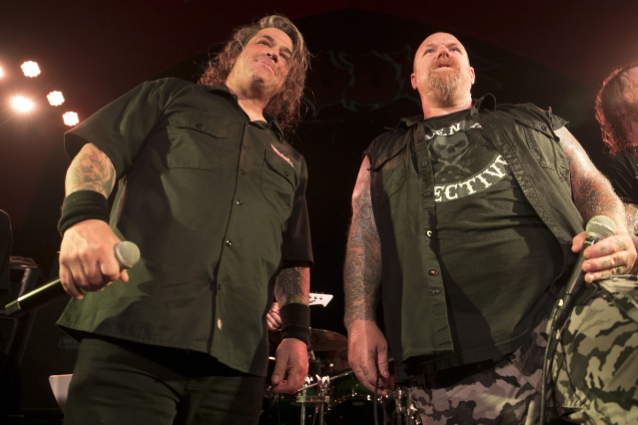 On December 26, Grey Haven Media will release video of a conversation between current EXODUS frontman Steve "Zetro" Souza and the band's former vocalist Rob Dukes, recorded earlier in the month at Zetro's studio in the San Francisco Bay Area as part of Souza's "Zetro's Toxic Vault" YouTube interview series. The one-hour-plus discussion is described as "raw and uncensored, with no stone left unturned."

Said Zetro: "This was the most insightful discussion I have had on the Vault. I learned things about EXODUS! My producer and I had discussed what to do with this interview. We decided on a pay-per-view event to cover expenses. Don't worry, this groundbreaking interview will be up on the Toxic Vault at some point. We thank you for the support!"

Added Dukes: "Hello people, last weekend I sat down with Zet for a conversation that spanned my life before during and after EXODUS. It was a really great talk, and after not knowing Zet, really, our friendship is cemented in fronting a legendary band. We told road stories and had some good laughs and some cool moments. I hope you all enjoy it as much as I did."

Grab a drink, smoke, settle in, and get this on your TV for the ultimate in viewing pleasure!

* 1080 HD multi camera / color corrected / pro audio.
* This will be available to watch for 48 hours
* This is not LIVE but pre-recorded.
* Send questions to [email protected]

Tickets are $6 and are available at this location.

This past summer, Dukes said that "everything's cool" between him and his former bandmates in EXODUS, six years after he was fired from the group.

The San Francisco Bay Area thrash metal legends in June 2014 announced the departure of Dukes and the return of his predecessor, Souza, who previously fronted EXODUS from 1986 to 1993 and from 2002 to 2004.

Dukes addressed his current relationship with EXODUS during a chat with Rock Immortal Productions' "Rock Talk" live interview series. He said: "[Getting fired] was bad, dude. It sucked, man. I was in the band for 10 fucking years, and now, all of a sudden, they throw me out. It was about money, and that's really what it was — it was business, man. And sometimes business goes the way it goes… I was pretty angry. Anger it always your first emotion. I was hurt. These guys were my friends. We were brothers and family. It was really bad timing on top of it. But all that said, it all worked out."

Three years after he was fired from EXODUS, Dukes performed with the band during a July 2017 concert in San Francisco, California. He sang several songs with the group on the second of EXODUS's two-night stint at The Chapel in what marked the band's first headlining Bay Area club shows since late 2013.

"I got up to San Francisco and we sat at a restaurant — all of us — and we talked, and everyone said their piece, and then it was fine," Dukes said about reconnecting with his bandmates. "I did a couple of interviews — I did one on 'Opie And Anthony', and I was fucking angry, and I shouldn't have brought it up, but Jim Norton fucking asked me, and then I fucking just unloaded and I called them all douchebags. It was fucked up of me to do that, 'cause up to that point, I had been pretty good about just being professional and talking about my gratitude for the opportunity and stuff. I tried to keep my shit together and be professional, but I kind of lost it for a little bit. And then, soon thereafter, I called and apologized to them and just explained kind of why, and it was all good, man. And it's all good right now, man. I talk to those guys constantly. Me and Jack [Gibson, bass] talked the other day. Me and Lee [Altus, guitar] talk a couple of times a week. Me and Gary [Holt, guitar], we talk pretty consistently. Tom's [Hunting, drums] living way up in the fucking mountains, so I don't talk to him that often… So, that's kind of where it's at. Everything's cool. I wish them all the best in the world."