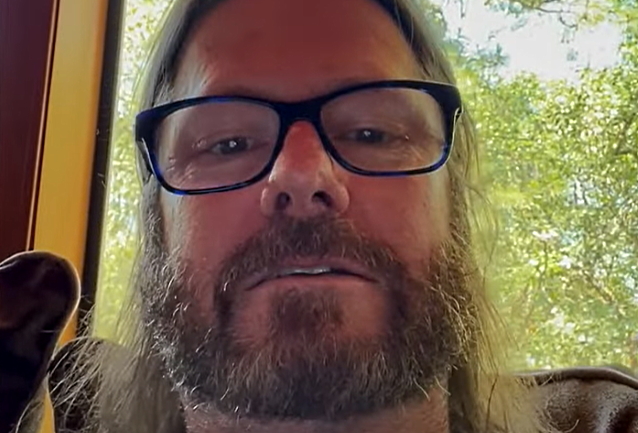 Guitarist Gary Holt of San Francisco Bay Area thrashers EXODUS recently answered a number of questions submitted by fans via e-mail. You can now watch his responses in the video below.

As previously reported, EXODUS has delayed the projected release of its recently completed new album, "Persona Non Grata", until November so that drummer Tom Hunting can fully recover from his battle with squamous cell carcinoma (SCC) of the stomach and join his bandmates on the road in support of the effort.

EXODUS singer Steve "Zetro" Souza addressed the delay in a recent episode of his "Zetro's Toxic Vault" Internet show. He said: "I know a lot of you guys have said, 'Oh, it was supposed to be out and released this summer,' and it was — it was gonna be released this summer. But this has kind of put a damper in things a little bit. So, the decision from the band and the decision from management and the label and everybody — I mean, it makes sense.

"It's a career-defining record," he added. "You guys have not heard it yet, but it's a career-defining album. And once you hear it, you will understand that. And it makes sense why we waited, so that he can be part of this. 'Cause nobody's thinking he's not — he's gonna fully recover from this. And we'll be out kicking your asses once again."

Zetro reiterated his optimism that Tom will beat the disease, with which the drummer was diagnosed in February.

"Tom's gonna have to have some treatment, and that's actually already started," Souza said. "He told me that he wanted people to know so that if anybody's experiencing these kinds of things, he wanted to open their eyes. And I thought that was great. I know you wanna keep it private and keep it to yourself, and it is a very heavy situation when something like this happens. But you definitely want to embrace that person and make sure that they're comfortable through it.

"Tom is one of the strongest guys I've ever met, if not the strongest guy," Zetro continued. "He lives in the mountains, and his training regimen is straight up out of 'Rocky IV'. I mean, he chops wood, and he really chops wood. I could chop about three fucking logs if I was lucky, and I'm done. He'll sit there and chop for ours. He's a very strong guy, and we all know that he's gonna beat this."

The 56-year-old Hunting revealed the diagnosis in a statement released on April 13. He said at the time: "I'm making this public to raise awareness for people to pay attention to symptoms of stomach and esophageal issues. If they persist, please go get it checked out.

"I'm not gonna be sheepish talking about it. I feel that if I can help someone with what I've learned, or someone out there has information to share with me, it's a win-win! When you can name the enemy, it's empowering, and you're one step closer to killing it."