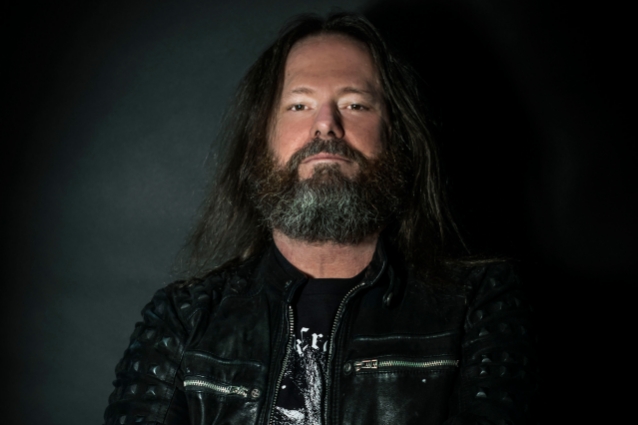 EXODUS guitarist Gary Holt spoke to Germany's "Pommesgabel" podcast about the lyrical inspiration for "The Beatings Will Continue (Until Morale Improves)", the first single from the band's recently released album, "Persona Non Grata". He said (as transcribed by BLABBERMOUTH.NET): "When I was watching all the rioting and stuff, and the riot cops just beating people with sticks — a lot of peaceful protesters being beaten. And it just made me think. It's a slogan; I've seen it before — the beatings will continue until morale improves. And it just made me think of that slogan when I was watching that in the background. What do they hope to achieve? If you beat enough people, they'll submit and become compliant and submissive. That's not the way humankind works — we fight back. And it seemed so counterproductive for me. So the song was written kind of tongue in cheek based on what I felt they were, I guess, hoping to achieve. But it didn't work. It never does. You can't beat people into submission — not anymore."

The Black Lives Matter protests that swept across the nation last year following the deaths of George Floyd, Breonna Taylor and several victims of police brutality. While the unrest in some cities after some Black Lives Matter protests included vandalism and looting, the vast majority of demonstrations were peaceful and leading BLM activists repeatedly distanced themselves from agent provocateurs and instigators, ABC News reported.

"The rioting was all due to the Black Lives Matter movement 'cause they were protesting being killed for nothing," Gary said. "And it's horrible shit that they have to go through. I'm one of those guys who I'm a big supporter of law enforcement but I also understand that being a cop doesn't give you the right to drag a guy out of a car and kill him for a traffic stop. If you're killing a guy, it's supposed to be done to protect your own life or the well-being of the general population, not because the guy didn't wanna get out of his car. You're not supposed to put your knee on his neck and fucking kill him. So that was the angle I took it from — it was based on the protests."

Holt went on to address a call by some to defund police departments in the wake of the murder of George Floyd, explaining that it tended to lump all police officers together.

"There's a whole lot of good cops in this world and there's a lot of cops in the United States and they're not all bad," Gary said. "And all of a sudden, people wanna defund the police departments. Who are you gonna call when someone's stealing your car? We need some police sometimes. But our police need to do a better job — some of them — of how they handle situations with the use of force."

Released on November 19, "Persona Non Grata" is the follow-up to 2014's "Blood In Blood Out", which was the San Francisco Bay Area thrashers' first release since the departure of the group's lead singer of nine years, Rob Dukes, and the return of Steve "Zetro" Souza, who previously fronted EXODUS from 1986 to 1993 and from 2002 to 2004.