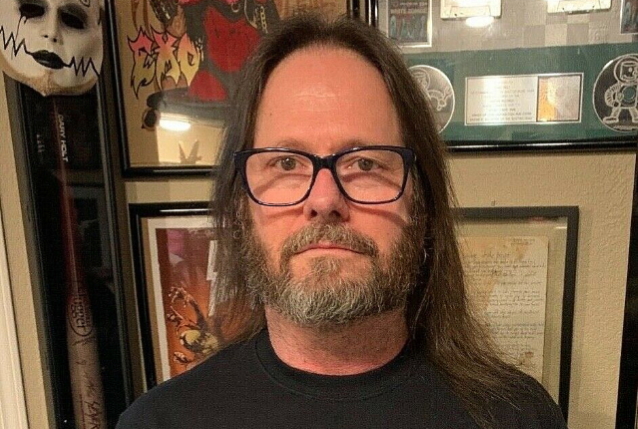 EXODUS's GARY HOLT On Getting Sober: 'I Don't Crave Or Feel Any Desire For Alcohol'

During an appearance on "Talking Bollocks", the monthly metal podcast hosted by ACID REIGN frontman-turned-stand-up-comedian Howard H. Smith, EXODUS's Gary Holt once again opened up about his decision to quit drinking alcohol. The 57-year-old musician, who resides in Northern California, said (as transcribed by BLABBERMOUTH.NET): "Like millions of people worldwide, I was a victim of the pandemic. On tour, I always maintained and never hit the hangover stage. Maybe once in a five-week tour I'd wake up with a little bit of a headache, and that's one night when we decided to have a disco party and started cranking some funk music and drink a few extra beers. But then I'd come home and I'd only drink when I was watching some sports or having some people over — a couple of beers. I'd go out to a show and have two beers. And then I found myself with nothing but idle time. I live kind of in the woods now, and I'd sit outside — it's beautiful, it's summer, I'm surrounded by oak trees, and I'd just start drinking. [I was] drinking, like, 12, 13 beers, and I was drinking these double, triple IPAs [with] 10, 11 percent alcohol. 'Cause I was always a beer snob; I'd get out my proper glass for whatever beer I was drinking. And it just got to the point where I was getting depressed when I got drink; I wasn't happy anymore. 'Cause my whole livelihood had been taken away from me. I'm feeling the same stress and strain as everybody else. So I figured, man, I quit smoking, I quit doing drugs years ago — almost 20 years ago — [so] I could live without the alcohol. It's no big deal. I mean, I still drink non-alcohol beers, and there are some really good ones out there. It's the taste of beer that I would miss; I don't miss the buzz. And it also has a strong placebo effect."

Asked if he thinks it will be harder for him to stay sober once he gets back on tour, Holt said: "No, not at all. It doesn't mean I have a more solid willpower than anyone else, but I don't crave or feel any desire for alcohol. I'm a guy, when he quits something, he just quits it and he's just done with it. I'm hanging out with the other bandmates, I had dinner twice over the weekend, and Lee [Altus, EXODUS guitarist] is having real beers and I'm having Heineken 0.0s. I never [think], 'Hmm, I want what he's got.' It doesn't appeal to me anymore."

EXODUS's new studio album, "Persona Non Grata", was released on November 19 via Nuclear Blast Records. It is the follow-up to 2014's "Blood In Blood Out", which was the San Francisco Bay Area thrashers' first release since the departure of the group's lead singer of nine years, Rob Dukes, and the return of Steve "Zetro" Souza, who previously fronted EXODUS from 1986 to 1993 and from 2002 to 2004.