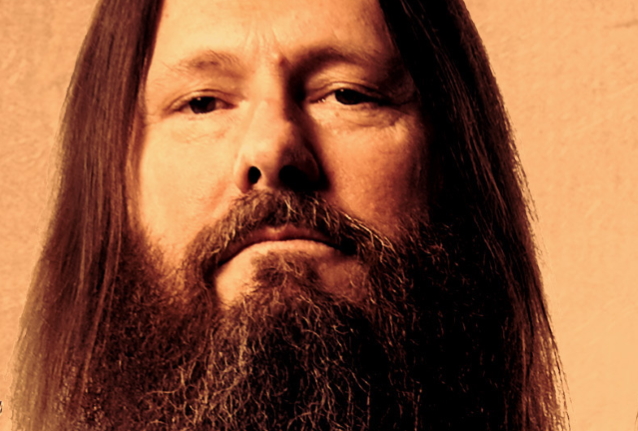 EXODUS's GARY HOLT Opens Up About His COVID-19 Diagnosis: 'It Felt Like Having A Really Nasty Flu'

In a brand new interview with MACHINE HEAD frontman Robb Flynn's "No Fuckin' Regrets With Robb Flynn" podcast, EXODUS guitarist Gary Holt talked about his COVID-19 diagnosis and what the touring circuit might look like post-pandemic.

The San Francisco Bay Area-based axeman, whose wife was also tested, got his results in late March, a couple of weeks after returning from "The Bay Strikes Back 2020" European tour with TESTAMENT and DEATH ANGEL.

Despite the fact that he was the only member of EXODUS that had a confirmed case of the novel coronaviras, Holt believes that some of his bandmates and crew might have also been infected.

"Who knows how many people were asymptomatic?" he asked (see video below). "We don't know. The whole band could have been walking along with it. I'm the only one that got sick. I was pretty sick. I didn't get out of bed. All I did was sleep for a couple of weeks. It felt like having a really nasty flu, but it lasted a little bit longer, maybe… I'm lucky. I've had the flu before, and that sucked too, and this was kind of on the same level."

According to Gary, he "had to fight" to get tested. "It took several e-mails and calls, and they finally tested myself and Lisa," he revealed. "And she tested negative, despite sharing a house and a room and a bed with me. My only conclusion I can come to on that is she had already had it and was asymptomatic, because as heavily contagious as it is, there's no way she doesn't catch it."

Asked by Flynn if we thinks we will be living in a "better world" once the pandemic subsides, Holt said: "I hope you and I still have a fucking industy when we get out of this. When you think about it, us musicians and athletes, we're the last that's ever gonna recover from this. Because restaurants will recover — maybe they'll space the tables out, and eventually they won't have to — but we're in a business where we depend on as many people as we possibly can, and we want more and more people. We depend on them being sweaty and in direct contact with each other. And how long is it gonna be before we see normality in that? Who knows? … I think we're gonna have it roughest."

On March 22, TESTAMENT singer Chuck Billy revealed that he has also tested positive for COVID-19. Also infected were DEATH ANGEL drummer Will Carroll, who spent nearly two weeks in an intensive care unit at a Northern California hospital, and TESTAMENT bassist Steve DiGiorgio.

Early symptoms of COVID-19 include fever and dry cough. Some people also experience fatigue, headaches and, less frequently, diarrhea. Shortness of breath can develop within about five days.

Every third patient in China — one of the countries with the most confirmed cases worldwide — experienced sputum production, which is thick mucus coughed up from the lungs, according to WHO (World Health Organization).

Officials have made it clear that the elderly — especially those with heart, lung and immunological conditions — are particularly vulnerable to the coronavirus.

According to the Centers For Disease Control And Protection (CDC),coronavirus is thought to spread mainly from person to person — between people who are in close contact with one another (within about six feet),and through respiratory droplets produced when an infected person coughs or sneezes. These droplets can land in the mouths or noses of people who are nearby or possibly be inhaled into the lungs.