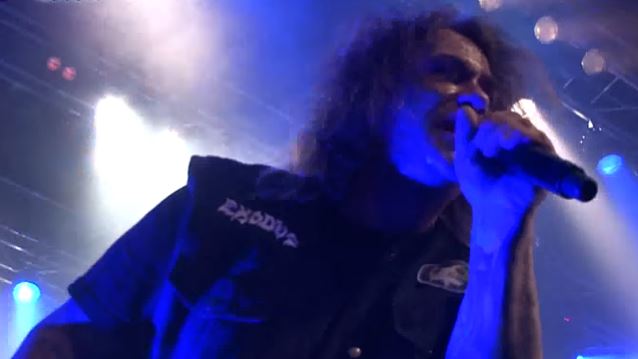 Rock Revolt Magazine recently conducted an interview with EXODUS singer Steve "Zetro" Souza. An excerpt from the chat follows below.

Rock Revolt Magazine: When I was first approaching this interview, I was going to gear it towards a "wrap-up" of the past year since "Blood In Blood Out" was released. However, a quick check of EXODUS tour dates has you guys going string well into March of 2016. That really speaks to the demand for you being back in the band and the strength of the album as well. What are your thoughts on that?

Zetro: I think both elements are definitely a factor to it. I don't want to say it doesn't have anything to do with me coming back, [but] sure, it does. "The original guy, the guy that sang for them when I was in high school." That's the mentality. Our fans are very loyal to that. When bands replace the singer, there's big dynamic there that you're used to. Does Arnel Pineda [current JOURNEY vocalist] do a great job in JOURNEY? Sure he does. But, how awesome would it be if Steve Perry came back, though? I look at it that way. When Blaze Bayley was singing in IRON MAIDEN — that's probably some of the heaviest stuff MAIDEN's done. But Bruce [Dickinson] is MAIDEN. Same with [Rob] Halford — I love "Ripper" Owens; Tim is my boy. But, when Halford came back to PRIEST, what was it like? It's the same thing — I hear it night after night. People scream, "Thanks for coming back, Steve!" That makes me feel great. It makes me feel appreciated, and gives me motivation, knowing that we're still relevant in the business. Thirty years after the first record, we are still relevant.

Rock Revolt Magazine: I think "Blood In Blood Out" was the record a lot of EXODUS fans were waiting for.

Zetro: Oh yeah. This is a thrash record. I don't want to say "back to your roots," necessarily, but I would have to say this is a very fast album, and very brutal — leads are brutal, rhythms are brutal, lyrics are brutal. You've got these 50-year-old men and they're still pissed off like they're 21 — that's our outlook. Now, the live shows are very important to us as well. Everybody sleeps a lot, no one's hammered until 8 or 9 in the morning on drugs like the old days, where by 10 a.m. everybody's drinking chocolate milk and eating pancakes. [Laughs] It's a whole different dynamic. It's not like we're good boys, we still drink and we're still rock 'n' rollers, but it's not like it was, man. Night after night — sex, drugs, rock 'n' roll; in bold letters and underlined. [Laughs]

Rock Revolt Magazine: When you did come back to EXODUS for this album, did anything surprise you about being back?

Zetro: I joined this band when I was 22. I'm 51 now. So, for me, even if you're not in EXODUS, you were in EXODUS, you know what I mean? People will see you and go, "There's Steve from EXODUS." You always have that, even if you're not an active member. This is my third time around. It wasn't like I expected it to be a certain way. I know these guys, I know their karma, are know how they are. I know what Gary [Holt, guitar] wants, and I know how they want it to sound. I didn't really fix much in the studio when I laid it down. They were, like, "It sounds pretty good. We'll send it off to Gary." Because Gary was on tour with SLAYER. The beauty of technology — just email the songs. There wasn't much they wanted done differently.