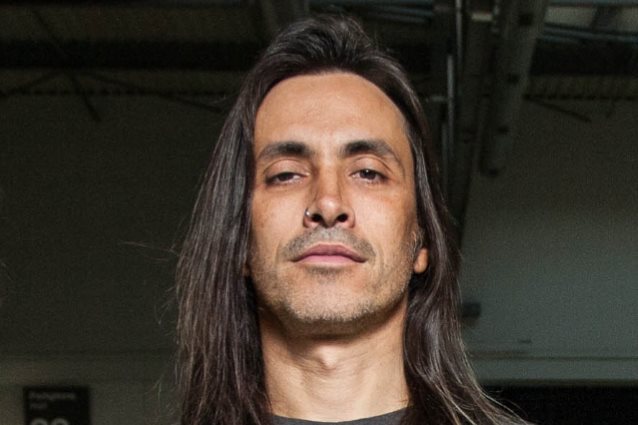 EXTREME Guitarist On Not Having Released New Album Since 2008: 'We're Disappointed In Ourselves'

In advance of EXTREME's upcoming tour of Australia with MR. BIG, guitarist Nuno Bettencourt recently spoke with the country's Heavy magazine. The full conversation can be streamed below. A few excerpts follow (as transcribed by BLABBERMOUTH.NET):

On the process of choosing a set list for a country in which the group hasn't performed in more than two decades:

Nuno: "The main thing is going to be just, look — when you haven't seen anybody for that long, what do you do? You've got to catch up. You try to give them as much as you can of each album — you give them three or four songs from each album, you take them on that journey, and you play all the strongest stuff that you think that they'd want to hear, that they'd want to experience."

On how the tour with MR. BIG came together:

Nuno: "It was a great little accident. We were trying to get back to Australia for so long, it was one of those things where we said, 'We've got to do it this year. We've got to do it this year.' Then all of a sudden out of nowhere, the [booking] agent said, 'Hey, the MR. BIG guys are trying to get over there as well. How do you guys feel about doing something together?' We were, like, 'Wow, that would be perfect. What a great way to go back. What a great bill that would be.'"

On whether he had any idea that "More Than Words" would become such a big hit:

Nuno: "To be honest, the ego in you believes of course [it can]. As you're doing it, especially with songs like 'More Than Words' and 'Hole Hearted', you think, 'Man, these could be hits.' They're great songs, but they only become hits when the public says they're hits. When the public says they're great, they become hits. You don't really write a hit song — you write a great song, and then if they public decides it's a hit, they take over from there. The song becomes its own monster. When we were doing that, there was no acoustic stuff out at the time. It was kind of a bit of a risk to do an acoustic song. There was nothing out like that. Radio wasn't playing [similar songs] — all the ballads were big, produced power ballads of the '80s. When we were doing the acoustic stuff, the label and radio stations were like, 'What are we supposed to do with this? Where do we play it? What format?' A lot of people didn't weren't sure it was going to be able to be heard."

On whether having success with uncharacteristic singles led to any "fan confusion":

On whether the band felt pressure to write similar songs that would replicate the success of their acoustic hits:

Nuno: "We've never written anything to have success with it. We've written songs that we love. We didn't write that song to be a hit, and we weren't about to chase it trying to write another one like it. We just wrote, and we always stuck to that. We still stick to that."

Nuno: "We split up for a bit, and we didn't play for a good eight to ten years. It's not always roses. It's hard being in a band. It's hard being in a relationship like that. But at the end of the day, when you have great fans, as corny as that sounds, if the fans show up and the passion that they have, they're the ones that make us want to keep going. We can play all we want, but if nobody's there, if nobody feels anything with what we're playing, then what's the purpose?"

On when to expect new music from the group, who haven't released an album since 2008's "Saudades De Rock":

Nuno: "You should have already seen another album — at least two by now, if not three. We're kind of disappointed in ourselves that we haven't released something yet, because we have so much material, and we've been going back and forth... I'm happy to say that we have a good actual vision right now of what we want to do. We have a good 20, 25 songs that we're almost wrapped up with. My goal is that by the fall, we have a new album out."

A live package celebrating EXTREME's "Pornograffitti" album was made available in October 2016. Titled "Pornograffitti Live 25 / Metal Meltdown", it includes a DVD, Blu-ray and audio CD recorded at the band's show at the Las Vegas Hard Rock Casino on May 30, 2015, where they performed the record in full.