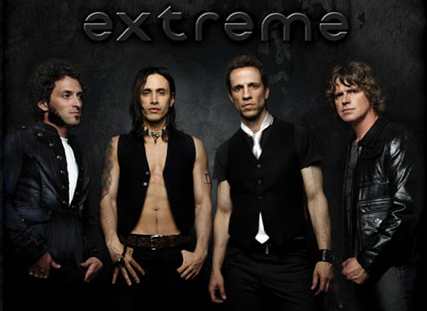 Gary Cherone and Nuno Bettencourt of Boston hard rockers EXTREME will perform the national anthem this Saturday, May 26 at 7:00 p.m. at Fenway Park during the Boston Red Sox vs. Tampa Bay Rays game.

Most recently, in the celebration of Fenway Park's centennial, Gary Cherone, Nuno Bettencourt and Daniel Bard joined forces and recorded a version of the song "Let The Good Times Roll", available on the "100 Years Of Fenway Park" album. A portion of proceeds benefits the Red Sox Foundation.

Bettencourt's special guest this Saturday will be Darren Parker, who has proclaimed himself one of Nuno's biggest fans. The band and fans know him as NunoFreak. Darren has an inoperable brain tumor, rendering him unable to work as his medical bills are mounting.

A fundraiser is being held on June 23 at Sleep's Bar & Grill in Bluffs, Illinois which will include an auction, donations and freewill. Darren's dream was to have Nuno show up, but, unfortunately, Nuno will be in London on tour with Rihanna. Bettencourt came up with a solution to help.

Last Friday, Nuno surprised Darren by calling him on the phone and invited him to be his special guest with Gary for the Red Sox game. This generous offer includes Darren to be on the field when they perform the national anthem. After the performance, Nuno will gift him one of his Washburn Nuno Bettencourt N4 guitars so Darren can auction it on eBay to help cover his medical expenses. The Red Sox has kindly agreed to let Darren come in the afternoon to watch soundcheck and then stay in the park to watch batting practice. "We are making this real special for him," states Bettencourt. After the phone call with Nuno, Darren sent management an e-mail saying that he "literally had to pull the car over on the side of the road for 20 minutes to just process the conversation he just had with Nuno."

For more information on the fundraiser, visit Darren's web site.