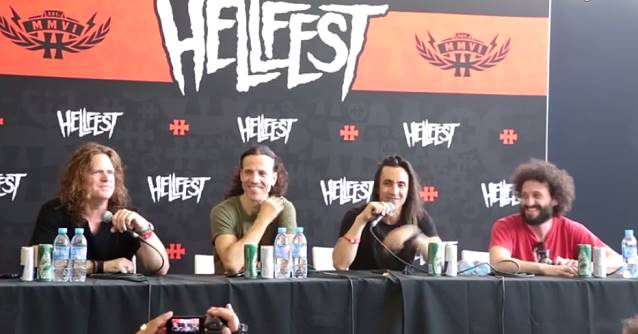 EXTREME 'Should Have' New Album Completed By End Of Year

Reactivated Massachusetts hard rockers EXTREME took part in a press conference on Saturday, June 21 prior to their performance at Hellfest in Clisson, France. You can now watch the question-and-answer session below.

Asked if EXTREME will follow the lead of other artists by releasing singles or EPs in the future instead of full-length albums, EXTREME guitarist Nuno Bettencourt said: "This is the first time we've ever gone on the road without new music [to promote], and I'm kind of embarrassed about that, to be honest.

"You know, it's doing that [we were performing] the [entire 1990] 'Pornograffitti' album [on some of the record tour dates], so it gives you a bit of an excuse to not have [a new] album [to tour behind]. But we're definitely working on [new] stuff, and by the end of the year, we should have a new album in. It won't be a little one; it'll be a regular size."