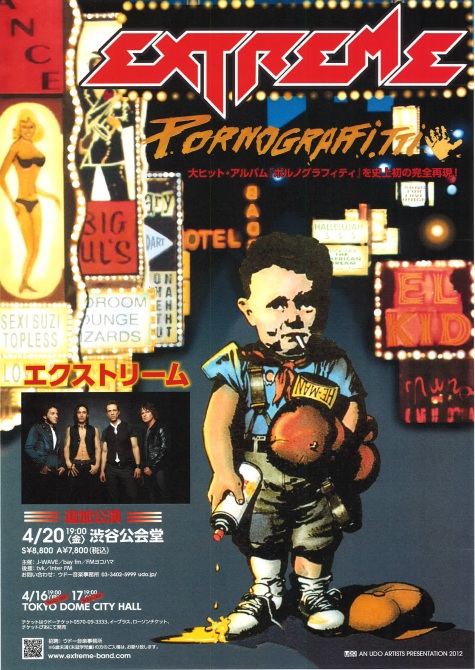 Reactivated Massachusetts hard rockers EXTREME will pay their second album, "Pornograffitti", in its entirety at four shows in Japan in April. The dates are as follows:

Released in 1990, "Pornograffitti" peaked at No. 10 on The Billboard 200 chart and was certified double platinum in the U.S. by the RIAA (Recording Industry Association Of America) for shipments in excess of two million copies. Two singles from the LP — "More Than Words" and "Hole Hearted" — reached the Top 5 on the Billboard Hot 100. Two other tracks, "Decadence Dance" and "Get The Funk Out", reached the lower half of Billboard's rock chart.

In 2008, following a 13-year hiatus, EXTREME returned to the stage for its "Take Us Alive" world tour, which encompassed 75 cities and multiple continents in support of the band's new record, "Saudades de Rock".

The concert showcases material from all five EXTREME albums and exhibits the band's broad stylistic abilities. Features include a blistering rendition of the LED ZEPPELIN-minded "Comfortably Dumb", the scorching "Play With Me", the funked-up "Cupid's Dead" as well as the anthemic "Get The Funk Out". Songs like EXTREME's #1 hit "More Than Words" and the Top 5 single "Hole Hearted" highlight the crowds enthusiasm and loyal support their fan base has had for this beloved foursome.