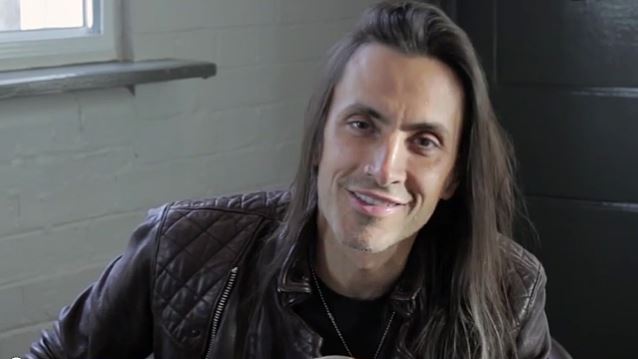 EXTREME's NUNO BETTENCOURT On JIMMY FALLON And JACK BLACK's Recreation Of 'More Than Words': 'It Was Pretty Funny'

Brazil's Wikimetal podcast recently conducted an interview with guitarist Nuno Bettencourt of Massachusetts hard rockers EXTREME. You can now listen to the chat using the audio player below.

Asked what he thought of Jimmy Fallon and TENACIOUS D frontman Jack Black teaming up for an impressively accurate shot-for-shot recreation of EXTREME's "More Than Words" music video for an episode of "The Tonight Show Starring Jimmy Fallon", Nuno said: "It was pretty funny. It was actually a surprise, because we didnt know. Nobody told us that Jimmy… Nobody called us and said, 'Hey, we're doing this video.' So I was on the West Coast and, obviously, it came out on the East Coast first, and I had a few friends calling me saying, 'Hey, are you watching?' I didn't know what they were talking about. So they were sending me little clips, taking pictures of the TV and recording it off the TV and sending it. It was kind of confusing. It was crazy, 'cause I had no idea. But it was pretty funny."

He continued: "It was done in good taste. They weren't making fun of it. I think they were being very respectful. Listen, when a guy puts on a wig and paints his nails and acts like you and everything, it's very flattering."

During an appearance on the May 11 edition of Eddie Trunk's SiriusXM satellite radio show, "Eddie Trunk Live", EXTREME vocalist Gary Cherone spoke about the band's plans to write and record the follow-up to 2008's "Saudades de Rock". He said: "Right now, we're all feeling the pressure of putting out something new. [Celebrating the 25th anniversary of EXTREME's 1990 album] 'Pornograffitti' is great. We're enjoying it. We're playing to new audiences the past couple of years. We're hitting Russia for the first time and China. We're going to South America in June for the first time in 23 years. So all that's great. But for me, and Nuno and the guys, we're writing, we're doing demos… Now it's like… Now we've gotta get… Let's get busy. Let's get some new music out."

He continued: "We're writing and demoing now, and, obviously, this summer, you take advantage of the touring season with the festivals… It's about all of us getting in a room together to record, and that's the fall. We'll find time to do it. But we'll be ready; the songs will be there."