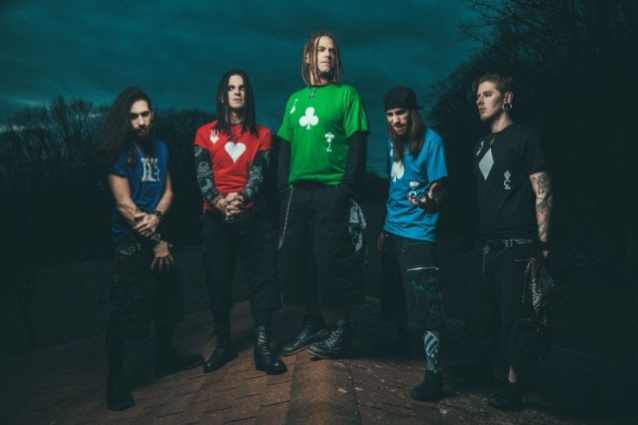 The official lyric video for the song "Deliverance" from FACE WITHOUT FEAR, the new industrial rock band featuring ex-STATIC-X and DOPE guitarist Tripp Eisen, can be seen below.

The group, which also features Ken "Mantis" Hoyt (CRUSHPILE) on vocals, T.J. Cooke (METHODICAL) on drums, and Dante on guitar, will make its live debut on August at QXT's in Newark, New Jersey. An EP is tentatively due this summer.

Formed in 2017 by Eisen, FACE WITHOUT FEAR draws you in with gritty-yet-polished guitar work, electronic sampling, and metal vocals infused with surprisingly refined melodic phrasing. In terms of lyricism, the concepts of individualism, liberty and freedom, as well as the universal experience with human relationships permeate their lyrics. The band also takes inspiration from the conceptual and futuristic world of Ayn Rand, and is where the band's name is drawn from ("Atlas Shrugged: Part II", Chapter 9).

Eisen combed the entire East Coast searching for the right chemistry and like-minded creative souls, and soon added Hoyt and Cooke, both local legends themselves, of CRUSHPILE and METHODICAL, respectively.

FACE WITHOUT FEAR has flavors of Tripp's previous projects along with elements of rock, metal and punk. The product is an industrial, nu-metal, groove-oriented mash. Eisen says: "This is the industrial-metal heritage that I've immersed myself in through the years; combining everything I've played since my inception, through many collaborations and crucibles and on up to this current incarnation. It's not just mindlessness and meaningless lyrics over metalized riffing and programming. We want to give our audience something to think about."

FACE WITHOUT FEAR's live show will feature an album's worth of original material, plus a few treats for fans of Tripp's previous projects as well as a few dynamic updated covers by such artists at THE BEATLES, RAMONES and MISFITS.

The first demo of "Deliverance" dates back to Tripp's time in STATIC-X, and, with Kenny's help, it's been updated and supercharged. "I am the real thing, won't you breathe in me, remove your disguise, even if it bleeds, I want the real thing" The vocalist says: "It's about bearing your soul, allowing your true identity to be seen by others, and the vulnerability that goes along with it."

Eisen — whose real name is Tod Rex Salvador — has kept a relatively low profile for more than a decade since serving time for meeting and sexually assaulting two underage females in January and February 2005.

Two years ago, Eisen told Totally Driven Radio that his arrest and prison sentence was "a difficult time of my life" and insisted that he has "learned from it" and "grown. What happened to me was really bad judgment, terrible mistakes that I made, and I paid a price for 'em," he said.

Last week, STATIC-X accused Eisen of "attempting to gain credibility through his past association" with the band. The group also denied that Eisen was actively involved in the making of STATIC-X's upcoming album. Titled "Project Regeneration", the disc will feature the last recordings of the band's late frontman Wayne Static, who passed away more than four years ago.