FAITH NO MORE has announced a number of rescheduled dates for the band's European tour that was originally slated for this summer. The influential alt-metal act was forced to postpone the dates due to the coronavirus pandemic which is sweeping the globe.

All currently held tickets remain valid for the new date. Refunds are available upon request. Please direct inquiries to the original point of purchase.

On Friday, rescheduled dates for FAITH NO MORE's performances with SYSTEM OF A DOWN and KORN were announced: originally slated for May 22 and 23 of this year, the shows will now take place on May 21, 2021 and 22, 2021 at Los Angeles's Banc of California Stadium.

FAITH NO MORE has also launched a fundraiser for the band's crew, which has been deeply affected by the postponed tour plans. Bassist Bill Gould explains: "There's been plenty of attention about the collapse of the concert industry, how it has been impacting musicians, artists, agents… but very little coverage has focused on the impact it's made on a crucial element of live music and touring: the crew. Without a band's crew, the show does not go on; yet in light of the recent postponements, they have been left with few options to support themselves, or their families. And speaking of families, the band that you know as FAITH NO MORE is more than the five musicians you see on stage. It is a larger family, an ecosystem that includes backline, a production manager, lighting, sound and tour management.

"We had an entire summer of touring booked — and now, as a result of this pandemic, all of our crew have been put into a seriously vulnerable financial position. We have been working with these folks for years, and we feel very close to them. Since shows are not an option, we are trying to do what we can to offset this unfortunate turn of events with a special merch sale."

The fundraiser includes an exclusive, limited-edition t-shirt design, a FAITH NO MORE logo mask as well as several highly collectible autographed vinyl copies of the band's most recent album, "Sol Invictus", as well as a variety of gig posters and show-used drumheads from FAITH NO MORE's 2015 tour. The merch is available now via FNM.com/crew-relief/. 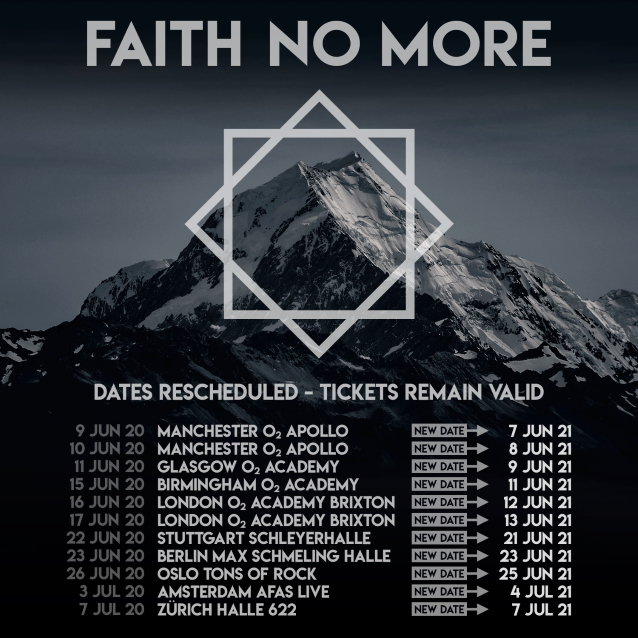