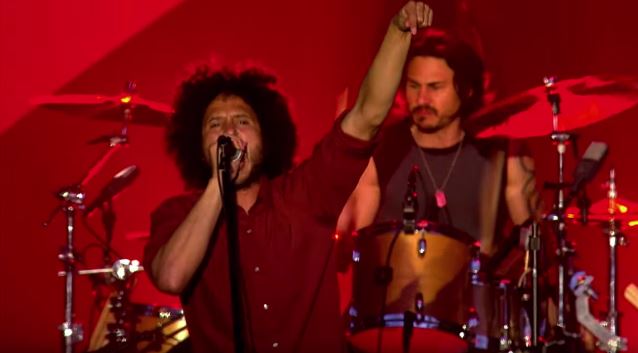 Fans Expecting Imminent RAGE AGAINST THE MACHINE Reunion Will Be Disappointed

A source close to RAGE AGAINST THE MACHINE has told Rolling Stone that the ProphetsOfRage.com web site does not have to do with an announcement of the band's return.

After RAGE AGAINST THE MACHINE directed fans to the web site earlier in the week along with the hashtag #TakeThePowerBack, a serious of posters cropped up around Los Angeles that read: "Clear the way for the Prophets of Rage. The Party's Over. Summer 2016." The rumors were further fueled by a countdown clock on the cryptic site that expires on May 31, along with an image of a broken slash through a red circle with silhouettes of five people, each extending their arms with clenched fists.

PUBLIC ENEMY's Chuck D also fanned the flames of rampant RAGE AGAINST THE MACHINE reunion speculation by tweeting links to videos of the latter band performing live in London in 2010.

However, it appears that fans are wrong. "This is not a RAGE-specific reunion," a source close to the group told Rolling Stone. "There's a lot more to it. There are a lot of moving parts, a lot of exciting news to be revealed."

Amplify reported earlier today that PROPHETS OF RAGE will consist of RAGE AGAINST THE MACHINE guitarist Tom Morello, bassist Tim Commerford and drummer Brad Wilk alongside Chuck D and CYPRESS HILL's B-Real. Ken Levitan of Vector Management is said to be representing the new band, which will perform songs by all three of the members' respective groups. There is no word yet on whether a new album is being planned.

According to Billboard, PROPHETS OF RAGE will make its live debut on June 3 at the Hollywood Palladium, with a show at L.A.'s Whisky A Go Go planned as well. A 2016 summer tour is also being considered.

The band recorded three original studio albums and one set of covers before breaking up in 2000. The group reformed in 2007 but only played sporadic gigs and never a full tour. Guitarist Tom Morello said in 2012, "We'd have to agree to go on one. Once a year, the band meets and very seriously discusses and turns down awesome offers to tour the world."